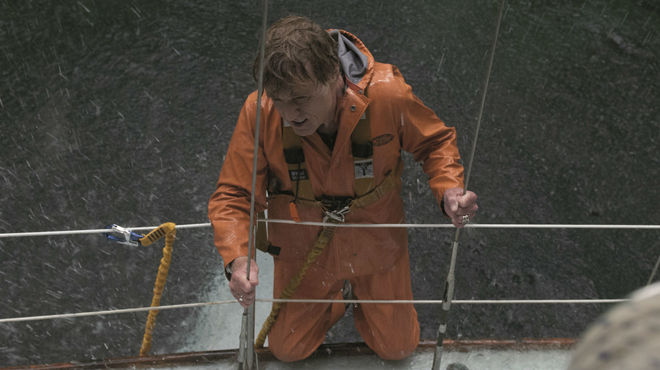 If one needs a particular fix of films that deal with isolation and loneliness, October will bring two acclaimed films that cover the topics in two vastly different arenas. At the turn of the month, Warner Bros. will release their space thriller Gravity, which sees Sandra Bullock attempting to survive thousands miles about earth, while a few weeks later, we’ll get Robert Redford‘s adventure at sea, All is Lost.

One of our favorite films at Cannes, we said “the second feature film from Margin Call director J.C. Candor, is an uncommonly effective piece that acts as a complete reversal from his previous feature.” Our full review goes on the film “rests entirely on Redford’s shoulders, and he carries it with grace and class. Moreover, the nuanced details in his performance anchor All Is Lost without exaggerating the direness of his own predicament.” Ahead of the release, we’ve now got Amen, an original song Alex Ebert (of Edward Sharpe and the Magnetic Zeros), as well as a batch of new photos and an international poster, which can all be seen below. Deep into a solo voyage in the Indian Ocean, an unnamed man (Redford) wakes to find his 39-foot yacht taking on water after a collision with a shipping container left floating on the high seas. With his navigation equipment and radio disabled, the man sails unknowingly into the path of a violent storm. Despite his success in patching the breached hull, his mariner’s intuition and a strength that belies his age, the man barely survives the tempest.

Using only a sextant and nautical maps to chart his progress, he is forced to rely on ocean currents to carry him into a shipping lane in hopes of hailing a passing vessel. But with the sun unrelenting, sharks circling and his meager supplies dwindling, the ever-resourceful sailor soon finds himself staring his mortality in the face.