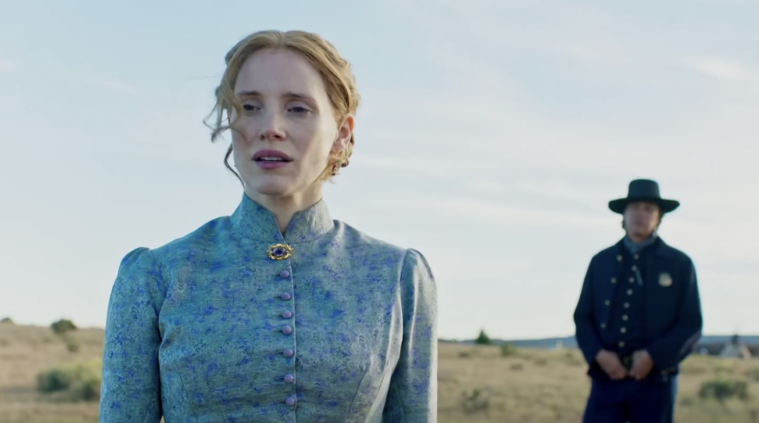 On the film festival circuit last fall, Jessica Chastain brought two films, but in order to not distract from the awards ambitions of Molly’s Game, the other was held until this year. Now ahead of a summer release, A24 has debuted the first trailer for the western Woman Walks Ahead, which comes from director Susanna White (Our Kind of Traitor) and writer Steven Knight (Eastern Promises, Locke).

Following the true story of an artist from New York who comes to Standing Rock in the 1880s in order to paint a portrait, but is met with a look at the government’s intrusion on Native American land, it certainly has unfortunately timely connotations. Also starring Michael Greyeyes, Chaske Spencer, and Oscar winner Sam Rockwell, see the trailer and poster below ahead of a DirecTV bow next month and a theatrical release in June.

Based on true events, “Woman Walks Ahead” tells the story of Catherine Weldon (JESSICA CHASTAIN), a widowed artist from New York who, in the 1880s, traveled alone to North Dakota to paint a portrait of Chief Sitting Bull (MICHAEL GREYEYES). Her arrival at Standing Rock is welcomed with open hostility by a US Army officer (SAM ROCKWELL), who has stationed troops around the Lakota reservation to undermine Native American claims to the land. As Catherine and Sitting Bull grow closer, and as their friendship—and his life—are threatened by imperious government forces, Catherine must contend with the violence that underlies her position.

Woman Walks Ahead hits DirectTV on May 31 and theaters on June 29.