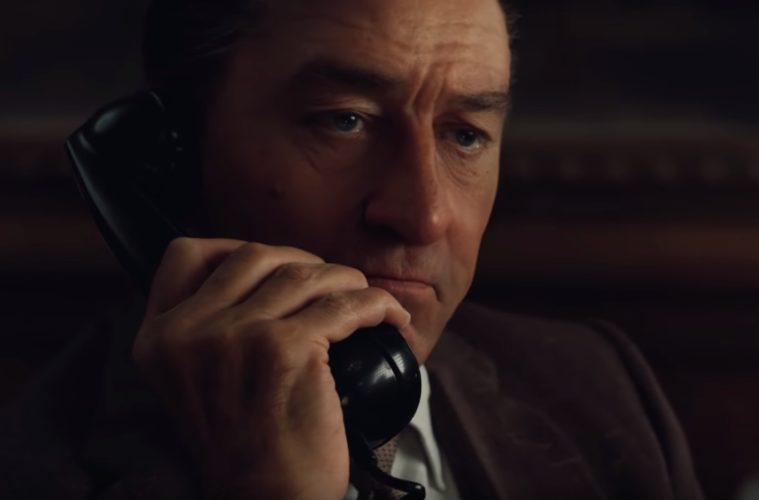 Following the announcement that Martin Scorsese’s long-awaited The Irishman will be world premiering as the opening night film of the 57th New York Film Festival, Netflix has now unveiled the first trailer. Starring Robert De Niro as Frank Sheeran, Al Pacino as Jimmy Hoffa, as well as Joe Pesci, Harvey Keitel, Anna Paquin, Bobby Cannavale, and Ray Romano, the story is based on the book I Heard You Paint Houses.

Scorsese will also quickly be jumping to a De Niro reunion with his Leonardo DiCaprio-led adaptation of Killers of the Flower Moon: The Osage Murders and the Birth of the FBI. Based on the book from David Grann, the author behind The Lost City of Z, Eric Roth (Forrest Gump, The Good Shepherd) has penned the script that follows the real-life conspiracy surrounding the murders of people in Oklahoma’s Osage Indian tribe after oil was found on their land. After being attached, De Niro is now in talks to play the serial killer William Hale. Production begins next summer with Paramount.

Speaking about his latest film, NYFF’s Kent Jones said, “The Irishman is so many things: rich, funny, troubling, entertaining and, like all great movies, absolutely singular. It’s the work of masters, made with a command of the art of cinema that I’ve seen very rarely in my lifetime, and it plays out at a level of subtlety and human intimacy that truly stunned me. All I can say is that the minute it was over my immediate reaction was that I wanted to watch it all over again.”

See the trailer, which offers our first look at the visual effects-heavy de-aging process, below.

The Irishman is a richly textured epic of American crime, a dense, complex story told with astonishing fluidity. Based on Charles Brandt’s nonfiction book I Heard You Paint Houses, it is a film about friendship and loyalty between men who commit unspeakable acts and turn on a dime against each other, and the possibility of redemption in a world where it seems as distant as the moon. The roster of talent behind and in front of the camera is astonishing, and at the core of The Irishman are four great artists collectively hitting a new peak: Joe Pesci as Pennsylvania mob boss Russell Bufalino, Al Pacino as Teamsters president Jimmy Hoffa, and Robert De Niro as their right-hand man, Frank Sheeran, each working in the closest harmony imaginable with the film’s incomparable creator, Martin Scorsese. – NYFF synopis

The Irishman world premieres on September 27 at the 57th New York Film Festival, followed by a Netflix release later this year.