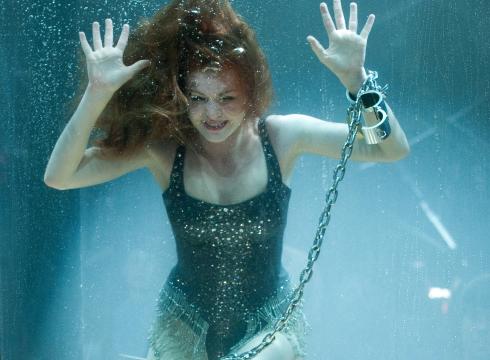 Louis Leterrier‘s (The Transporter, The Incredible Hulk) career as a director thus far has certainly not been a highly decorated one, but in the world of action filmmaking, his efforts, by and large, have been mostly digestible (though a good deal of people would argue that his last work, Clash of the Titans, was a career low-point). That said, his upcoming magician-heist thriller Now You See Me, which just wrapped shooting and is slotted for a January 18, 2013 release date, is shaping up to sound rather promising, if only because it packs an ensemble that could go toe-to-toe with just about any other one out there.

On top of which, The Chemical Brothers, whose delirious, dizzying electronic landscape arguably gave Joe Wright‘s Hanna the most memorable score of last year, are handling the scoring duties, and the film’s globe-hopping scale should almost assuredly give them a showcase platform.

Meanwhile, a submerged first-look image for the film has just debuted, and it’s interesting to note that, in a cast that includes the likes of Mark Ruffalo (who, according to many, gives the peak performance in The Avengers), Woody Harrelson, Morgan Freeman, Jesse Eisenberg, Michael Caine, and Mélanie Laurent, it’s Isla Fisher (The Great Gatsby) who’s been singled out for the first official still. [USA Today]

If there’s one cause for concern here, it’s the fact there are five screenwriters — including Boaz Yakin, of the recent Safe — currently credited, which potentially suggests a scattered vision. But with a cast this ripe for fireworks, it’s hard to imagine that this one won’t be worthwhile in one way or another.

What do you think of the first-look image?