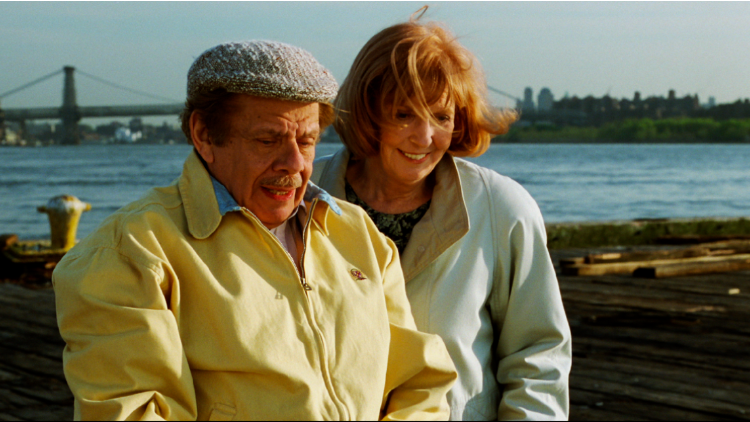 New York City’s Quad Cinema has done a great service in spotlighting the oft-overlooked films of Joan Micklin Silver, screening Hester Street, Crossing Delancey, and Old Enough in various series since they’ve relaunched. With Cohen Film Collection, they also gave a run to a restored Between the Lines, and now another restoration from the director is opening next month.

Arriving on November 8 is Joan Micklin Silver’s rarely-screened New York City comedy A Fish in the Bathtub starring real-life couple Jerry Stiller and Anne Meara, as well as Mark Ruffalo (a year before his break-out role in Kenneth Lonergan’s You Can Count On Me) and Jane Adams. Marking the director’s last theatrical release, the 1999 film follows the comedic duo as they quarrel over a new aquatic member of the family, and things spiral out of control from there.

We’re pleased to debut the delightful new trailer for the 20th anniversary restoration, which can be seen below.

Legendary comedy duo (and real-life husband and wife) Jerry Stiller and Anne Meara star as the constantly bickering couple at the center of this sprightly comedy from writer-director Joan Micklin Silver (Hester Street, Crossing Delancey). When Sam (Stiller) stubbornly refuses to get rid of the new pet carp he’s unleashed in their bathtub, Molly (Meara) finally decides she’s had enough and moves in with their married son Joel (a young Mark Ruffalo). Desperate to get his mother out of his hair (and house), Joel enlists his boy-crazed travel agent sister (Jane Adams) to help repair their parent’s relationship—meanwhile he’s tempted toward infidelity by a flirtatious client (Missy Yager). Replete with Micklin Silver’s signature wit and loving lensing of New York’s city streets and suburbs, this little-seen gem is fun for the whole neurotic family. The new restoration of A Fish in the Bathtub opens on November 8 at Quad Cinema.