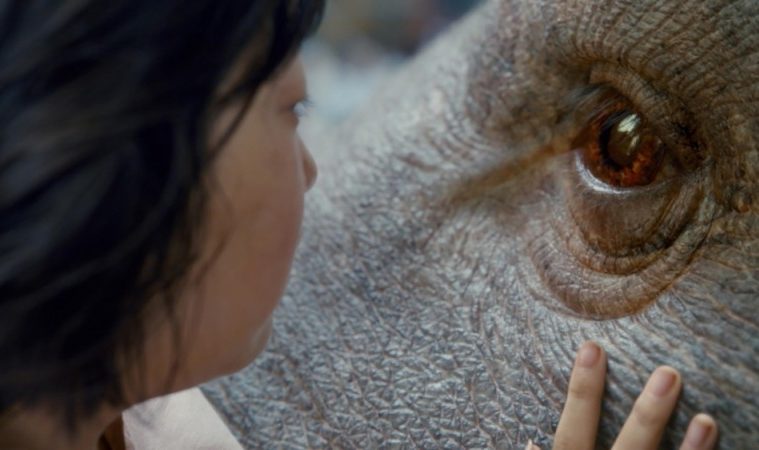 It may not win the Palme d’Or if the jury president has his way, but that doesn’t lessen our anticipation for Bong Joon-hoo‘s Snowpiercer follow-up Okja. Starring Ahn Seo-hyun, Tilda Swinton, Jake Gyllenhaal, Paul Dano, Steven Yeun, Lily Collins, Devon Bostick, Byun Hee-bong, and Shirley Henderson, the Netflix-produced and distributed feature tracks the struggle to stop a multinational corporation from kidnapping the titular monster. The first full trailer has now arrived which shows off much more of the adventure.

“At first, Darius Khondji, my cinematographer, and I wanted to shoot Okja on 35mm, but Netflix insisted that all Netflix originals be shot and archived in 4K,” Bong tells Variety, discussing the approach to cinematography. “Khondji then figured that we would use Alexa 65, which equates to a 70mm film in digital format. It makes a great cinematic vibe.”

Check out the new trailer and poster below.

For 10 idyllic years, young Mija has been caretaker and constant companion to Okja—a massive animal and an even bigger friend—at her home in the mountains of South Korea. But that changes when a family-owned multinational conglomerate Mirando Corporation takes Okja for themselves and transports her to New York, where image obsessed and self-promoting CEO Lucy Mirando has big plans for Mija’s dearest friend.

With no particular plan but single-minded in intent, Mija sets out on a rescue mission, but her already daunting journey quickly becomes more complicated when she crosses paths with disparate groups of capitalists, demonstrators and consumers, each battling to control the fate of Okja…while all Mija wants to do is bring her friend home.

Okja premieres at Cannes and hits theaters on June 28.