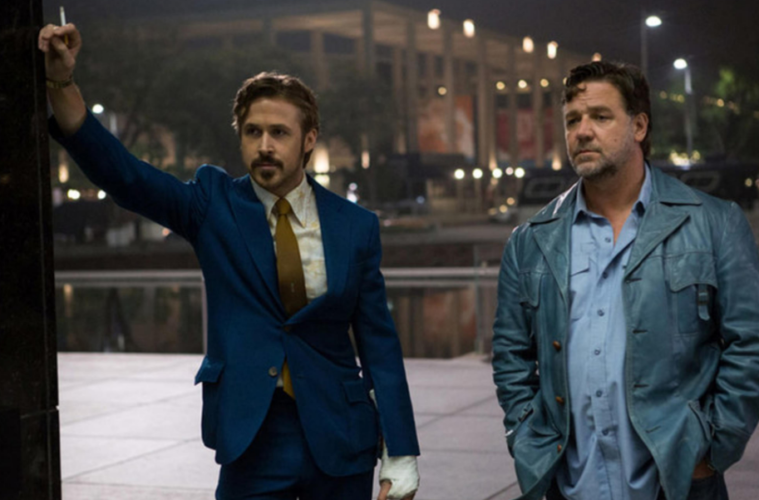 While Hollywood’s summer kicks off this Friday with a certain superhero showdown, the first studio feature we’re genuinely excited for this season will arrive in two weeks. Shane Black‘s The Nice Guy marks his return to the world of crime comedy, his last foray coming over a decade ago with the excellent Kiss Kiss Bang Bang. Starring Ryan Gosling and Russell Crowe, the 1970s-set tale follows tough guy Jackson Healy and private detective Holland March, who are working on a missing-person case.

Ahead of its release on May 20th, and even before its Cannes premiere on May 15th, Warner Bros. held the first screening last night at Austin’s Alamo Drafthouse Cinema. Complete with a post-screening Q&A featuring Gosling, Crowe, Black, and producer Joel Silver, we now have the first reactions. These are overwhelmingly positive, so it looks like Black has once again hit it out of the park. Check out the round-up below, along with the final trailer, and return for our review fairly soon.

There’s a chance THE NICE GUYS is the ultimate Shane Black film. Holy shit is this one great.

The Nice Guys is great. Shane Black is full on Shane Black here and @russellcrowe & @RyanGosling could make a series out of these characters — Eric Vespe (@EricVespe) May 5, 2016

The Nice Guys is Black running on all cylinders. Support it. Holy shit funny and good.

The Nice Guys: if I were any more in the tank for this, I’d drown. With that being said, it’s reallllllly funny and stuff. — Will Goss (@williambgoss) May 5, 2016

The Nice Guys is pretty great. happy to have goofy Ryan Gosling back, and if anyone can make me like Russell Crowe again, it’s Shane Black.

The Nice Guys is a great movie. Shane Black killed it again! — Merrill Hagan (@MerrillHagan) May 5, 2016

I saw my first advance screening of a movie that actually matters, and I think I’m aloud to say that THE NICE GUYS is fan-expletive-tastic! — Connor Kelley (@WhichItIs) May 5, 2016

#TheNiceGuys is awesome! Saw a screening and #RyanGosling #RussellCrowe were hilarious! Go see it! Wear a diaper, cause you’ll pee yourself.

Guys, THE NICE GUYS is everything you want and more. You should all be fucking grateful that you’re getting a hilarious Shane Black movie. — Ken Hanley (@movieguyiguess) May 5, 2016

THE NICE GUYS is one of the movies I’m going to ask people about to see whether or not we can still be friends.

THE NICE GUYS is a blast and the most entertaining flick I’ve seen in years. You all must see it! #TheNiceGuys pic.twitter.com/pvyzQVJHlQ — Rob Galluzzo (@IconsRobG) May 5, 2016

Look, I haven’t seen Civil War yet but I HAVE seen The Nice Guys and it’s fucking GREAT

Saw an early screening of Shane Black’s The Nice Guys last night. Can’t say too much, but I’ll say I fucking loved it. See it when it’s out.

The Nice Guys was hilarious and must be seen by fans of comedy, action and detective films!

The Nice Guys is an incredibly entertaining movie. And has the best pornographic Pinocchio character in film history.

By the way can we talk about how refreshing THE NICE GUYS feels in that you don’t have to sink 200 million bucks to create spectacle? — Ken Hanley (@movieguyiguess) May 5, 2016

I had the highest of high expectations for The Nice Guys & I’m not disappointed. Been a while since I saw a movie like this one.

What I’m saying basically is that THE NICE GUYS is just very great and I hope it becomes the next LETHAL WEAPON franchise — Ken Hanley (@movieguyiguess) May 5, 2016

Just saw an advanced screening of The Nice Guys. It’s a funny movie. Check it out. — Calvin Studzinski (@CalStudzinski) May 5, 2016

Dont trust the trailer, #TheNiceGuys is a much better, funnier, & thorough film than the trailer makes it out to be!

So, THE NICE GUYS…..really good film. Go see it when it comes out.

When it comes out in 2 weeks everyone needs to see #TheNiceGuys. Shane Black is the king of subverting expectations with a visual punchline. — Jayson Quearry (@JayQuearry) May 5, 2016

Fucking loved THE NICE GUYS. Easily going to be one of my favorites of the year.

Please go see #TheNiceGuys on May 20. It’s so great and we need more movies like it made in Hollywood. — Jordon Brown (@THEJordonBrown) May 5, 2016

The Nice Guys. All I can say is I liked and recommend it. All other thoughts are embargoed.

Caught an early screening of #TheNiceGuys liked it, didn’t love it. A tad underwhelmed. Gosling and Crowe were great in it though! — Dane Williams (@DaneDWilliams) May 5, 2016

The Nice Guys opens on May 20th.