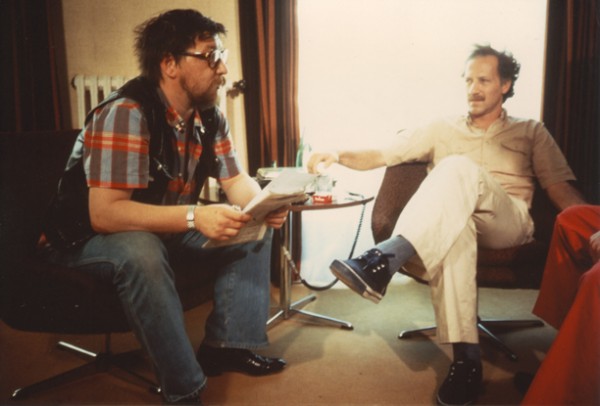 Thirty-one years ago today, Rainer Werner Fassbinder died from a cocaine-induced heart attack in his Munich apartment, leaving behind a career and legacy in some ways unmatched by any filmmaker before or since. His death can almost feel to be beside the point: having made 40 features, performed numerous times over, and otherwise utilized some two decades of creative output to their absolute fullest extent, he, by thirty-seven, did what most couldn’t accomplish with 110 years of their own.

As a roundabout way of celebrating the man’s touch and influence, we bring you the associated work of a fellow countryman: Room 666, director Wim Wenders‘ documentary featurette chronicling experiences and trains of thought from talent gathered at the 1982 Cannes Film Festival. In just under 44 minutes, the audience is given a peek inside the minds of Fassbinder, Godard, Herzog, Spielberg, and Antonioni, to name a few — a fine proposition at face value, though since with an additional historical value three decades removed. (The stories about Jaws are rather illuminating when held up against Hollywood’s modern production processes.) With this much talent crammed into a short span, the experience of Room 666 wields unique power.

Have a watch below: