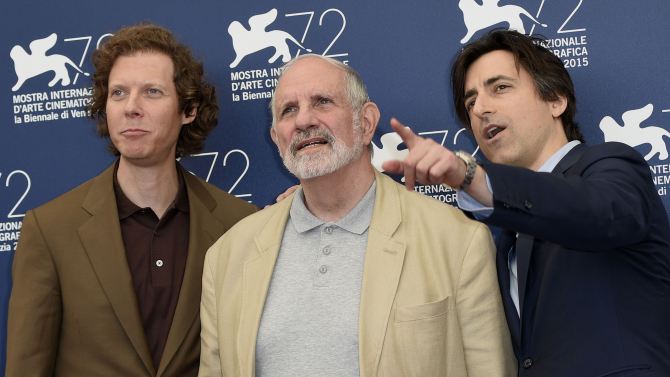 Being a great admirer of Brian De Palma, I found that no film from 2015 was as purely pleasurable as Noah Baumbach and Jake Paltrow‘s De Palma, a blow-by-blow examination of the director’s massive oeuvre. Its structure is simple — De Palma speaks candidly about his upbringing, early efforts, and subsequent successes (as well as failures); many clips and archival materials are interspersed — but the effect to which their resources are wrung evinces a great deal of attention and care. In Baumbach’s own words, “This is the only movie, probably, I can safely say, that I’ll be involved with that I can just keep watching over and over again. I find it so interesting.”

After screening their work for press and industry members at this year’s New York Film Festival, the pair engaged in an Amy Taubin-led Q & A featuring audience questions. It’s hit-and-miss, as these things tend to be — I’ll pat myself on the back a little too strongly by noting that my own question, the very last, is the only one that seems to impress and stump both of these De Palma experts — but good insights are gathered throughout. My favorite part? When Baumbach explains the unexpected influence by saying, “In a way, Brian, for me, sort of existed as what movies were awaiting me as a I got older. And then, once you start seeing them, they kind of go into your head and they don’t come out. I carry so many of those images over. The way I remember them, when I revisit them, I’m always surprised at how different they might be than the way I remembered them.”

Watch the full discussion below and read our review here.

De Palma has been purchased by A24 and will be released in 2016.