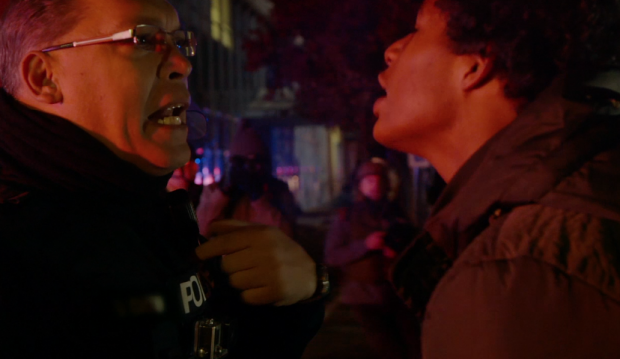 Trailer For ‘Do Not Resist’ Dissects the State of Policing

With tension at a fever pitch height between police and the public, documentarian Craig Atkinson‘s film Do Not Resist comes at an extremely resonant time. In the wake of the tragedy in Missouri with Michael Brown, the documentary explores the militarization of the police force and the training tactics that are being taught — including footage of a ride-along with a South Carolina SWAT team. From firing ranges to courtroom hearings, Atkinson’s portrait of policing, which won Best Documentary at Tribeca, looks to be a vital, wide-ranging one.

We said in our review: “Making an alarming case for big data in policing, the film also seems to miss a key element that should raise your blood pressure: the fact that these innovations can be paid for by selling data to the private sector, including repo men and others looking to locate someone for private business purposes. Taking innovation to its very end, an academic comes to very shocking conclusions based upon the kind of predictive analysis that veers into Minority Report territory. Should we be worried? Yes, and while Killing Them Safely offered a comprehensive analysis of Taser International’s operations and political influence, Do Not Resist seems to resist an analysis of the economies and profit motives driving the technology at the heart of the war on drugs, the development and implementation of new police toys, and Ferguson’s own pyramid scheme to fund municipal operations on the backs of poor people of color.”

Starting on the streets of Ferguson, Missouri, as the community grapples with the death of Michael Brown, DO NOT RESIST – the directorial debut of DETROPIA cinematographer Craig Atkinson – offers a stunning look at the current state of policing in America and a glimpse into the future. The Tribeca Film Festival winner for Best Documentary puts viewers in the center of the action – from a ride-along with a South Carolina SWAT team and inside a police training seminar that teaches the importance of “righteous violence” to the floor of a congressional hearing on the proliferation of military equipment in small-town police departments – before exploring where controversial new technologies including predictive policing algorithms could lead the field next.

Do Not Resist opens September 30th.