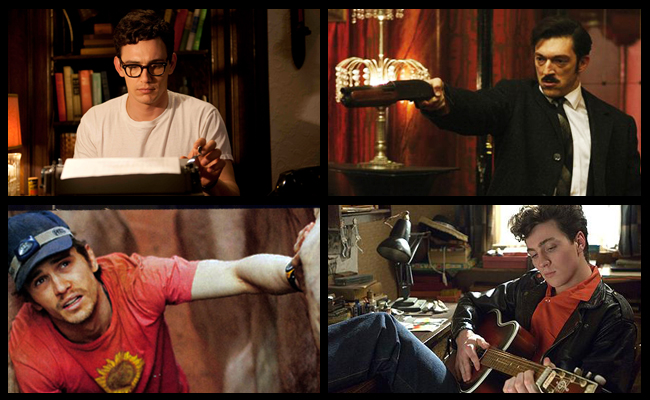 With the Fall comes an onslaught of dramas angling for award season attention. And this means biopics!

The land of Hollywood biopics is a magical place where an entire life story can be told in under two hours (hopefully), complete with some sort of satisfying climax that delivers a message about life’s deeper purpose (again – hopefully). And even when biopics seems more like a crazy amalgamation of anecdotes or a fourth grade biography book report, it’s still a genre where even the roughest bruiser or plainest Jane will be played by a rippling heartthrob or a glamorous starlet. All your sins are shown to the world, but damn your doppelganger looks good!

In honor of this magical transformation, I bring you: Mark Whitacre was the inside man of a lysine price fixing scandal. He worked hand-in-hand with the FBI to put his bosses in jail, while still pursuing his own slice of the pie.

A pretty average Joe with a way wacky story, Whitacre must have been pretty pleased to hear Matt Damon would be playing him! The downside? Damon put on 30 pounds to play the part. Still, it’s a definite upgrade. Beating out Julia Roberts as Erin Brockovich (Erin Brockovich 2000) and Sandra Bullock as Leigh Anne Tuohy (The Blind Side 2009) for the number 9 spot, is Kidman with her own sassy Southern Belle with balls! Sure, Brockovich and Tuohy each snagged Hollywood A-Listers for their respective life stories, but neither upgrade was as drastic or as needed as Smart’s.

Pamela Smart was a not-so-cunning murderess that seduced her 15-year-old lover into killing her husband. She’s currently serving a life-sentence, but hey Nicole Kidman played her in the movie! This beautiful French ingénue made her breakthrough stateside with the tragic biopic of the iconic French torch songstress, Edith Piaf. And while the look is dead on, Cotillard is a definite upgrade. Even with those teeny eyebrows. As all movie cowboys are upgrades (the old west was not a place for hygiene or pretty boys), it was a tough call to pick which Hollywoood horse wrangler would make the list. And despite a childhood crush that led me to watch Luke Perry in 8 Seconds more times than I’d like to admit – the choice was clear. Newman and Redford take the #7 spot for making dodgy-looking cowboys look so good! Plus – it’s a twofer! Chaplin always oozed charm and vulnerability while being brilliantly funny  – but Downey made him sexy. Lawrence was a British Army officer who helped to unite Arab tribes against the Ottoman Empire in the 1910s. He was a man of adventure, and Lawrence of Arabia told his tale with breathtaking scope. Peter O’Toole with his big blue eyes and commanding tones gave Lawrence the Hollywood upgrade befitting the 70 MM aspect ratio.

Plus, look at those baby blues! Long before Hayek was pulling off the bearded lady look in Cirque du Freak: The Vampire’s Assistant, she was rocking a mustache and unibrow as the iconic and odd painter, Frida Kahlo. Even in her self-portraits, Kahlo never looked so good. What Shakespeare looked like has been a topic of debate for centuries, but recently forensic anthropologists have made this 3D image of the author based on a death mask found in Germany in the 1840s. Yikes. Luckily, the J. Fiennes has got the Bard’s back, making many ladies swoon over a man in tights.

The Australian actress brought sass and moxy to the dowdy British queen, then pulled off Dylan’s look better than he ever did. The royal we are pleased. Depp’s built a reputation on creating lovable oddballs out of the weirdest characters set to celluloid. Good thing for these artists and criminals. Not a looker in the bunch, and even with a lust for violence, Indian makeup, an angora sweater, or a truly god-awful haircut, Depp does them each all kinds of favors.

But take note – Depp didn’t do the Barrie soup-strainer. Maybe even he can’t pull off that mustache without looking like a sex offender.

Did your favorite biopic makeover make the list? If not, add it in comments!