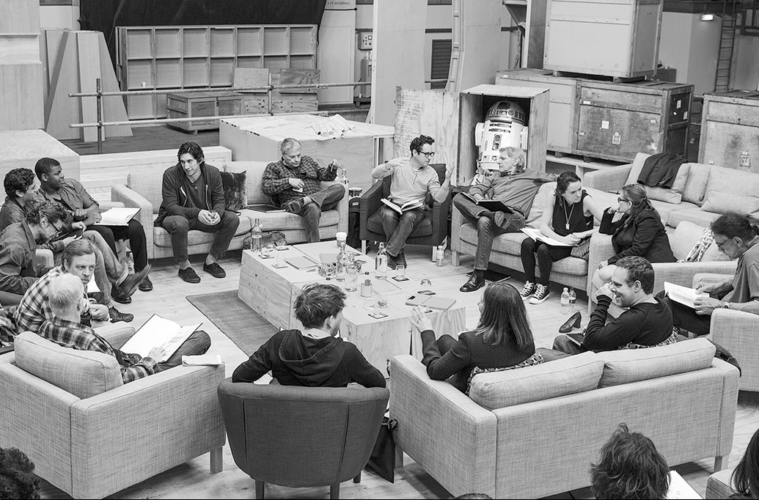 At long last, the cast for J.J. Abrams‘ Star Wars: Episode VII has been unveiled. After months and months of endless rumors, with the entire ensemble gathering for a table read in London today (seen above) ahead of official photography kicking off, Disney and LucasFilm have released the entire, main list of who’ll take part in the film.

With Harrison Ford (Han Solo), Carrie Fisher (Princess Leia), Mark Hamill (Luke Skywalker), Anthony Daniels (C-3PO), Peter Mayhew (Chewbacca), and Kenny Baker (R2-D2) all returning, the newcomers to the franchise will be Adam Driver and Oscar Isaac (making for the perfect Inside Llewyn Davis reunion), as well as Attack the Block star John Boyega, Daisy Ridley, Andy Serkis, Domhnall Gleeson, and Max von Sydow. While some of them have been previously rumored, such as Driver for a villain role, there’s no confirmation on the exact characters they’ll be playing.

See the press release below, with much more to come.

The Star Wars team is thrilled to announce the cast of Star Wars: Episode VII.

Director J.J. Abrams says, “We are so excited to finally share the cast of Star Wars: Episode VII. It is both thrilling and surreal to watch the beloved original cast and these brilliant new performers come together to bring this world to life, once again. We start shooting in a couple of weeks, and everyone is doing their best to make the fans proud.”

Star Wars: Episode VII is being directed by J.J. Abrams from a screenplay by Lawrence Kasdan and Abrams. Kathleen Kennedy, J.J. Abrams, and Bryan Burk are producing, and John Williams returns as the composer. The movie opens worldwide on December 18, 2015.

One can also see an acting reel for Daisy Ridley, who nabbed the lead female role, below, as well as photos of all the newcomers to the franchise.

Update: Disney has ripped down Ridley’s acting reel from the internet. We’ll replace if one should arrive.