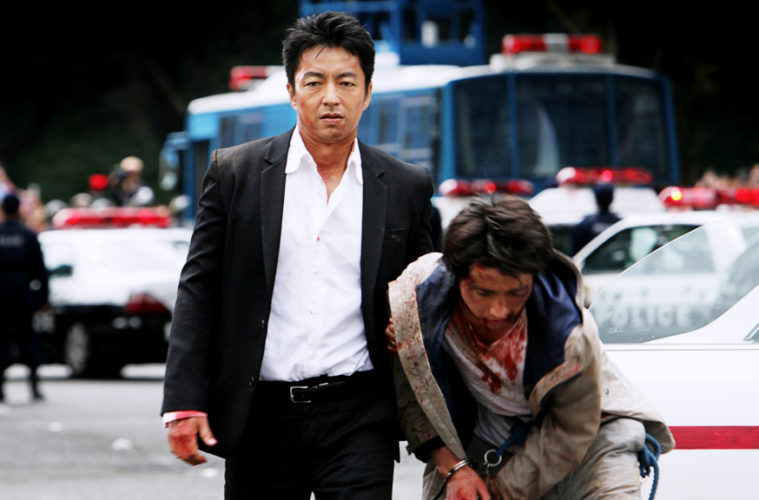 Takashi Miike On His Cannes Drama ‘Shield of Straw,’ Violence, Being Prolific and Possibility of Hollywood Debut Despite not having the biggest splash at this year’s Cannes Film Festival, Takashi Miike is still an important figure in the global cinema landscape. Included in the main competition, Shield of Straw is a thriller of epic proportions that boils down questions of morality versus greed. His largest scale production to date, Miike was faced with vast challenges in terms of preparing the material. We were fortunate enough to sit with the prolific director during a roundtable interview at the festival to discuss the inspiration behind the film and the driving factors that keeps him the busiest working director in Japan. Check out our conversation below.

The Film Stage: How did you get started on this film?

Takashi Miike: It’s based on the source material which is the novel and it is the first novel that he [manga artist Kazuhiro Kiuchi] wrote. He is immensely successful in Japan. It’s very manga-esque, if you will. This story has great drive. There are things that are slightly implausible. Having said that though, what is the justice within you – that is the question. I felt that it was going to be interesting material for a film that was going to be entertaining.

Your film has to do with vengeance.

For the samurai, it was about their honour and pride. If your revenge was to kill somebody for your honour, that was legal. But with modern laws, we are now living in a more peaceful society. But in a way because of the peace people have to repress their true emotions and feelings. And then you have the incident in the film where you have an old man asking for vengeance and that’s an affectionate love, for your children, your grandchildren, so it’s more a familial thing than a matter of pride. And you have the detectives who have to protect the clan, they have their social needs, and they have their own sense if pride in the film. For example, if your family member suffered something like that, you would probably be able to empathise, to feel those emotions. You have also the criminal who does appear as a monster, but than again, from another point of view, he’s just living his own life as he sees fit. And in countering this person, everyone has to look at themselves to see who they truly are. We come to the conclusion that there is no good and evil. There’s no straight line dividing the two. It’s not two separate things. Everyone has both elements until they come to their recognition. How difficult was it to shoot on such a massive scale for this film?

Actually the budget wasn’t huge but I didn’t intend to make a film that was just entertaining, lots of action. My intention was to make it more like an independent cinema kind of film so that you start off with something that almost looks like a Hollywood film. Through the course of the film, many elements are wiped away, and you end up a film that is just a very simple independent cinema kind of style. It gives more heart to something that we have made . And it is very much in the tradition that it was made that in Japan there are films that are specifically made for straight-to-video type of genre films and it’s very much made in the same light. However the budget, as a filmmaker, it’s never enough. But of course that’s where you have to become creative and the way that creativity is expressed is also a reflection of what that artist’s character is like.

How do you manage to make so many films every year?

Of course comparatively speaking you may say that I make a lot of films, but when I was an assistant director, I worked on a lot of projects with different filmmakers and I think it’s not (a lot of films), that it’s something that I want to do and that’s why I chose to make films and the way to get there is to be in that environment, to be on set. If there were no films to be made, I’d be the world’s laziest person. I love being on set making films. Genre, budget, a cast that I love – these are not elements don’t determine whether I make a movie. What I always have on my mind is how to bring to fruition a real life project. And I always think about how to realise them and what the final product would be like.

I have already shot (in 3D) once. Had a ball. Really enjoyed it. It’s because for the 3D technology my peers who had a struggle with film and that technology is borrowed from digital cinema now and we’re able to shoot a lot faster now than my predecessors. Of course I may not be in the environment when I’m making 3D movies but it’s very natural for me shooting in 3D and I truly enjoyed it. What I find unfortunate of course is the cost. It’s very expensive still. But in a few years’ time, the engineers will probably find a way to make it much cheaper. You are associated with that specific kind of genre film. What is the secret behind making genre films?

What I find most important is the crew. The level of the crew, the ability of the crew. Even if you had, hypothetically speaking, the perfect screenplay, that doesn’t guarantee that you will make a perfect film. With genre films, there are a lot of plot holes in the script. But that deficit sometimes makes it more interesting. So you take what’s lacking, and you can fill that hole with your ideas. And if you have a screenplay, there are two good scripts. One would be a text that is not as appealing when read but the content itself is something that holds you. But what we mostly call a good script is easy to read, so it’s actually well written in terms of text, but when you actually shoot the film and then make the film, it’s very different from what’s written on the page.

Is there a difference in the way your films are perceived in Japan and overseas? Are they more commercial at home?

Well I make diverse types of films. And if I can fit it into my schedule, I would even shoot TV dramas that would only be broadcast at midnight, which are very low budget. I also made Ultraman, which is a superhero film, which is geared towards children. I do everything. I think in Japan everybody sees me as someone who will take on any kind of material and is not bound by one. But it gives me freedom and I enjoy that. Usually you are in your career and you are seen as a certain type of director. But I don’t feel that I’m one thing and that’s why people can approach me with different projects.

Would you act in your films or other directors’ films?

Acting is difficult. But because in Japan, stand-ins are done by assistant directors, and having been one, where you have to stand in for the actors, you kind of imagine what the actor would do, and that’s where you start to design the mics and lighting. So I did that and I made a lot of big discoveries on the other side of the camera. As a crew member, you are on the other side of the camera, or you’re watching the monitor. But to be able to actually stand in as the actor, you’re in the same place, the same set, but what you’re seeing is completely different. And you can see how the crew works, moves around. That was really new and interesting to me. And you’re in the same film set but in a completely different world. I play a characters with a few lines. I only have time to wrap my head around the lines and I have a newfound respect for actors because they of course have to memorise all the lines. And even if they are not great actors, the fact that they can memorise all the lines and can stand in front of the camera gives me enough respect for what they do. What is your stance on violence in films, particularly this one?

In our lives, in the real world, violence is something that suddenly strikes you, even if you are averse to or don’t like violence. if you’re drunk, you may fall into the ditch. You’re walking with your child, and you encounter a traffic accident. So say if you have a love story, a romance, that you’re filming in the form of cinema, you’ll see the possibility of violence there. You can’t say there’s no violence. I feel a little uncomfortable to say that there’s always an element that it could happen. But personally as a viewer, I am not someone who loves only to watch violent films. But I love characters who, as the storyline unfolds, have the possibility of encountering violence. So when you follow that character, obviously, your behaviour could become violent, maybe. It’s very organic for me. And it’s interesting how violent scenes accelerate themselves. But within that, I never force an actor to say anything evil or act anything evil. It’s just that when the actor’s in that zone and they’re playing a violent character or a character that encounters violence, they enjoy, as an actor, that situation, that environment, and it becomes what it is. But as a filmmaker, I always make sure that everybody’s safe. And even if it is hand to hand combat, I make sure that nobody’s hurt. And there is a lot of love, even if the scene is very violent. But if you put together these scenes that are actually made in a very loving environment, it can become, through editing, very violent. Violence and love are something that seems to be always linked. Maybe two faces of the same coin.

This film has less violence than your previous films and it focuses more on relationships between the characters.

Well this is my normal stance, but I make my film primarily of the Japanese audience, and I find that the Japanese audience are becoming less tough. There are not many touch audiences if you will. They don’t want anything to happen in their movies. Even if it’s a horror film, they want to laugh. They want to say, oh my god it was so scary! A tearjerker, a tragedy – they want to say, oh no, so sad! So on the surface I make films that are something that they can come and watch without risking anything and feel safe, and for that violence is of course something that can become a deterrent. So I took out a lot of that from this film.

Would you make an English-language Hollywood film in the future?

If I had the chance, yes, I would love to do that. But I also feel like as a filmmaker I should films that can only be made by a Japanese person with that identity. So instead of broadening my focus, it would be interesting to focus on something that might be extremely specific that might not be understood by many people. But you make something like that and then to show it to people and may be universally understood may be something that can transcend culture. That’s something I would like to do. And if I shoot in English, I probably have to keep asking, what did he say? That’s going to be quite a challenge.

Shield of Straw screened at Cannes Film Festival and is awaiting U.S. distribution.