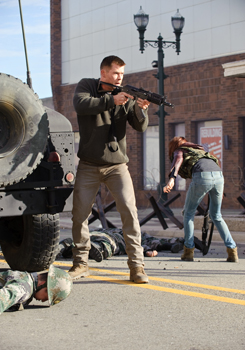 Considering how unnecessary a remake to 1984’s Red Dawn is, I suppose the most interesting aspect is the regime changed pulled by MGM, switching the villains from Chinese to  North Koreans. In a move I can’t imagine would help the box office that drastically, the film is now finally ready to be unveiled and after a shoddy ET tease, we now have the first trailer.

Directed by Dan Bradley, the cast is strong, with Chris Hemsworth, Josh Peck, Josh Hutcherson, Adrianne Palicki, Isabel Lucas, Connor Cruise and Jeffrey Dean Morgan, but unfortunately the final product looks unremarkably cheap. With a plot that seems to take beat-for-beat from the so-so original, one wonders why they didn’t branch out a bit and “modernize” it so to speak. While Hemsworth and most of the rest of the bunch are good actors, I’d be curious if they would pick this three-year-old project in their current career state. See the trailer below.

In RED DAWN, a city in Washington state awakens to the surreal sight of foreign paratroopers dropping from the sky – shockingly, the U.S. has been invaded and their hometown is the initial target. Quickly and without warning, the citizens find themselves prisoners and their town under enemy occupation. Determined to fight back, a group of young patriots seek refuge in the surrounding woods, training and reorganizing themselves into a guerilla group of fighters. Taking inspiration from their high school mascot, they call themselves the Wolverines, banding together to protect one another, liberate their town from its captors, and take back their freedom.