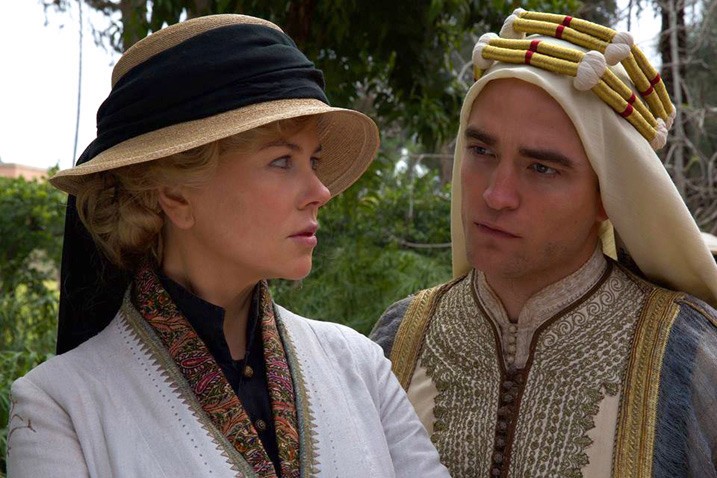 Nicole Kidman Gets Adventurous in U.S. Trailer for Werner Herzog’s ‘Queen of the Desert’

Over two years after it premiered at the Berlin Film Festival, Werner Herzog‘s Queen of the Desert will finally be arriving in the United States. The adventure film tracks the story of legendary cartographer Gertrude Bell, a diplomatic explorer, who negotiated with Arab nations and helped establish the countries of Iraq and Jordan. Led by Nicole Kidman, Robert Pattinson, James Franco, and Damian Lewis, ahead of a release from IFC Films next month, a new trailer has now arrived.

We said in our review from Berlin, From his very first feature, 1968’s Signs of Life, Werner Herzog has demonstrated a predilection for stories revolving around exceptionally zealous and uncompromising – if not outright maniacal – individuals. These individuals, thus far, have always been men. It’s therefore somewhat disappointing that the protagonist of Queen of the Desert, the first woman to be granted center stage in one of Herzog’s narrative features, is possibly the most conventionally drawn character in his oeuvre – a criticism that can be extended to the film as a whole.”

Nicole Kidman and director Werner Herzog bring to life the extraordinary true story of a trailblazing woman who found freedom in the faraway world of the Middle East. Gertrude Bell (Kidman) chafes against the stifling rigidity of life in turn-of-the-century England, leaving it behind for a chance to travel to Tehran. So begins her lifelong adventure across the Arab world, a journey marked by danger, a passionate affair with a British officer (James Franco), and an encounter with the legendary T.E. Lawrence (Robert Pattinson). Stunningly shot on location in Morocco and Jordan, Queen of the Desert reveals how an ahead-of-her-time woman shaped the course of history.

Queen of the Desert hits theaters and VOD on April 7.