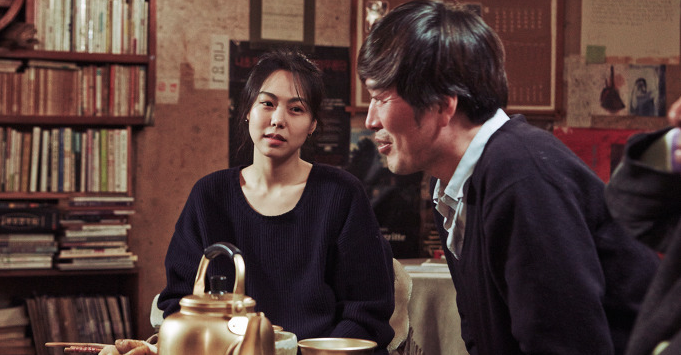 First Look at Next Films From Hong Sang-soo and Andrzej Zulawski, Premiering at Locarno Ahead of a full announcement in two weeks’ time, the Locarno International Film Festival have revealed that they will be debuting Hong Sang-soo‘s Right Now, Wrong Then and Andrzej Zulawski‘s Cosmos, two titles highly anticipated around these parts. The South Korean favorite is following last year’s beloved (yet still unreleased, domestic-wise) Hill of Freedom with what, thanks to the fan Tumblr Hong Sang-soo Web — easily the greatest online resource for this writer-director that I’ve found — we have a synopsis from and set of photos for. Main character who’s a film director? Check. Main character wandering around area he doesn’t know very well? Check. Main character meeting and becoming infatuated with woman? Check. The consuming of Soju? Check. A secret that reorients everything we’ve seen so far? Check. A bifurcated structure? Check. Yes, this is indeed a Hong picture.

Read about it below:

“By mistake, film director Ham Chunsu arrives in Suwon a day early. With time to kill before his lecture the next day, Chunsu stops by a restored, old palace and meets an artist named Yoon Heejung. Together, they go to Heejung’s workshop to look at her paintings, have Sushi with Soju for dinner, and get close. Later, they go to another café and have more drinks with Heejung’s acquaintances. When asked if he is married, Chunsu is forced to reveal the fact that he is, and Heejung gets deeply disappointed… In the second part of the film, a similar story of ‘meeting and parting’ unfolds. Here, the woman’s voice seems intimidated and her body crouched. The man and the woman go about to the same places, but this time the man strips himself and what not.”

Cosmos, Zulawski’s (he of Possession fame) first film since 2000, adapts Witold Gombrowicz‘s novel of the same name, in which two young men’s trip to the Polish countryside is interrupted by ominous occurrences and signs of great portent. Essentially nothing has been seen of the picture during its long development process, but we now have a behind-the-scenes photo and teaser poster to gaze upon. (Still not much, sure, but patience should be rewarded.) With Resnais muse Sabine Azéma starring alongside Jonathan Genet, Andy Gillet, Jean-Francois Balmer, Johan Libereau, Victoria Guerra, and Clementine Pons, Cosmos has the makings of something unforgettable — and, between this and Right Now, Wrong Then, Locarno is shaping up rather nicely

Above and below, take a look at photos (first image via fansite PARKSUNGWOONG):