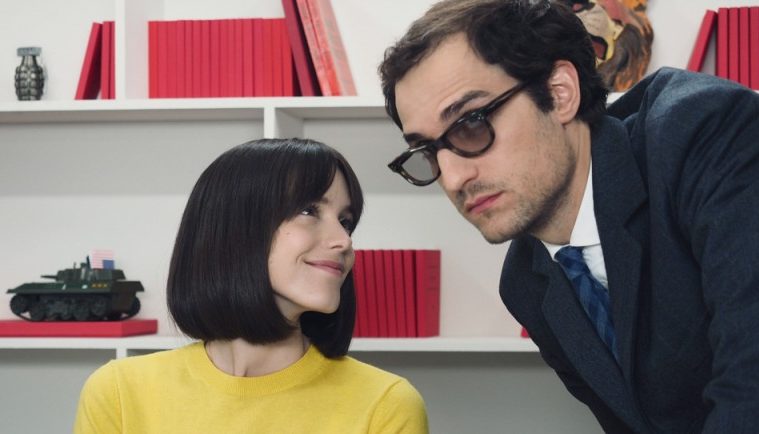 As Jean-Luc Godard prepares for a potential Cannes debut of his new feature, a biopic on the French New Wave Icon (which premiered at the festival last year) is gearing up for a U.S. release. After taking on the silent era with his Best Picture-winning The Artist, Michel Hazanavicius followed it up with the little-seen The Search, and now he’s back with Redoubtable, which has been retitled Godard Mon Amour here in the states.

Featuring Louis Garrel as Godard and Stacy Martin as Anne Wiazemsky, the film depicts their relationship within the director’s late-60s “revolutionary period,” beginning with the production of his Mao-centered La Chinoise. Based on Wiazemsky’s memoirs Un An Après, Godard himself isn’t a big fan of the film: “Oh, to even hear about it do not want to! I do not like it. Although, in fact, do not care. Stupid idea, stupid,” he said. And Cohen Media Group is certainly having fun with that quote when it comes to their poster.

“It’s more Pastiche du Godard than Histoire(s) du Godard in Michel Hazanavicius’ Redoubtable and that’s not a bad thing,” Rory O’Connor said in his review. “The director’s slight but surprisingly playful account of nouvelle vague maestro Jean-Luc Godard’s marriage to actress Anne Wiazemsky and his re-radicalization in the late 1960s has the potential to infuriate the more devout of Godard followers but there is plenty of good-hearted goading and creative homage to savor for the less pedantic fan.”