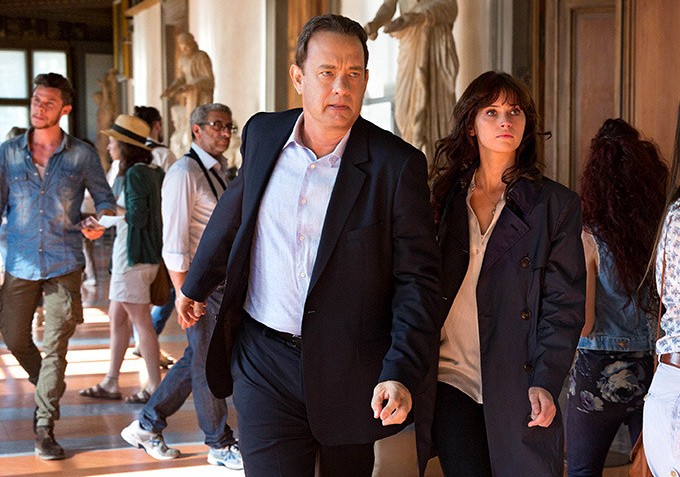 Dan Brown is back on screens this fall with Inferno. Following up The Da Vinci Code and Angels & Demons, Sony decided to skip over The Lost Symbol (which Mark Romanek was circling, but eventually dropped) and go directly to Brown’s 2013 release. Featuring the return of both Tom Hanks as Robert Langdon and director Ron Howard, they welcome Felicity Jones, who has another major fall feature with Rogue One: A Star Wars Story.

For those unfamiliar with the latest book in the series, it follows Langdon as a target of a worldwide manhunt after he can’t recall what dangerous events recently took place. Assisted by Dr. Sienna Brooks (Jones), she helps him solve the riddle of his lost memories. The first trailer has now arrived for the feature also starring Omar Sy, Sidse Babett Knudsen, Ben Foster, and Irrfan Khan, which can be seen below along with the posters.

Academy Award® winner Ron Howard returns to direct the latest bestseller in Dan Brown’s (Da Vinci Code) billion-dollar Robert Langdon series, Inferno, which finds the famous symbologist (again played by Tom Hanks) on a trail of clues tied to the great Dante himself. When Langdon wakes up in an Italian hospital with amnesia, he teams up with Sienna Brooks (Felicity Jones), a doctor he hopes will help him recover his memories. Together, they race across Europe and against the clock to foil a deadly global plot.