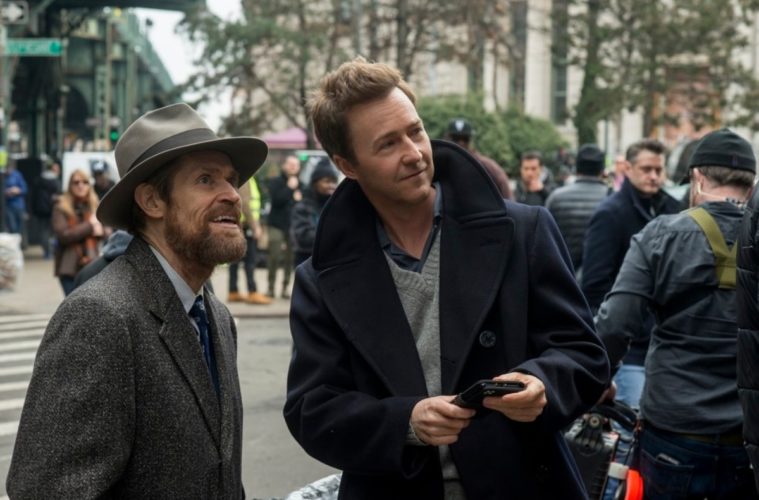 Edward Norton on the Journey of ‘Motherless Brooklyn,’ Alec Baldwin as Trump, and ‘Star Wars’

A day after celebrating Motherless Brooklyn’s closing night screening at the 57th New York Film Festival, Edward Norton was back to work promoting his movie. As Norton describes it, he tried making the movie for twenty years and was involved at every level: he wrote the screenplay, directed, and played the lead role.

Norton’s Lionel Essrog is obsessed with solving the murder of his best friend and boss, private detective Frank Minna (Bruce Willis). Essrog has Tourette’s Syndrome and uses it along with his eidetic memory to find connections where others don’t. Lionel’s pursuit leads him to Moses Randolph (Alec Baldwin), a Robert Moses-like character in 1950s New York, who works in secret to turn the city into an industrialist’s playground.

We spoke with Norton about the long process of bringing Motherless Brooklyn to theaters, how he used Lionel’s Tourette’s Syndrome for comedy without being cruel, Alec Baldwin’s Trump impression, and using Star Wars a model for his character’s relationships.

The Film Stage: The story goes it has taken nearly twenty years for you to make Motherless Brooklyn. What happened to get the movie off the ground?

Edward Norton: I think the people who came together around the movie in early 2017–I can’t say there was ever a definitive tipping point, but I felt that part of what was strengthening people’s resolve and enthusiasm to take a chance with it–it was a function of the urgency they were feeling around the themes of the movie. With the cast I think it was the substance of the piece and our relationships, but it was allowing us to get the resources at just enough of the right level with the right people whom what it was about validated the risk.

Toby Emmerich [the chairman of Warner Brothers] had always been a champion of it. I think it was happy, karmic coincidence that he called me in early 2017 and said, “God, this story feels white-hot to me.” And it was in that timeframe his own star ascended, deservedly, to where he was a decision-maker about what a big studio like Warner could include in the portfolio of what they’re getting behind. He said to me, “I’m not going to have this job and not do at least one movie a year that is the type of movie Warner Brothers used to make and we all came up on.” He did A Star is Born with Bradley Cooper last year and he did mine this year. He’s got a rare strength of conviction to make room within the demands of what they have to do with the media company and now the phone company to still sustain what their studio has traditionally been. It’s cool that he’s not just crunching the data in a way where something has to be a pretty big success, if there ever is such a thing.

In the movie, you play Lionel’s Tourette’s Syndrome for comedy, but it’s never punching down at him or the disorder. How did you accomplish making it funny without making fun of him?

Everyone’s told a story about themselves where they’ve tripped themselves up and it’s hilarious and self-effacing. That’s why there’s an emoji of the face slap, right? We can all relate to the “I can’t believe I just did that” moment. There’s a difference between a character being laughed at despite them being in real pain–that’s cruelty. If you’re laughing with someone who has the capacity to be bemused and rueful things then it’s affection.

It has a lot to do with the opening scene with Bruce Willis. When he comes and you see he and Lionel can have an affectionate relationship around winding Lionel up. That there’s pleasure in the intimacy with the condition and that it can be a laugh and a smile between him and his best pal, you already know the ground rules include humor. It doesn’t give Lionel a pass to deal with his own limitations as a person. He still has to grow up, decide if he’s going to engage with the larger world and care about other people. I think the most insulting thing you can do in depicting a condition is to make the person a saint only because they have a condition. Dealing with a complete, faillible, evolving person is the best way to respect any character.

It would have been easy for Alec Baldwin to play Moses Randolph the way he plays Trump on SNL, but he plays him as a nuanced person with reasons for what he does that goes beyond a surface-level understanding.

Let me be clear, I never had a concern Alec was engaging in this act of satirical subversion. I don’t think that what he’s doing in satirizing Trump is a light or small thing. I think it’s a really big thing because in many ways people like Trump, real tyrants and bullies, the thing they hate the most is to be teased. Sophisticated debate is exactly what they evade so they despise being teased. What you see in Trump’s response is what a total snowflake he really is. I think what Alec has done is a really effective knife attack on a bully. Trump’s not big-minded enough to tolerate being mocked and that’s why it’s the right approach to that character.

I came up on Alec the dramatic actor: Stanley Kowalski on Broadway and in Glengarry Glen Ross. To a lot of us he’s always had this incredible straddle of lethal charm and lethal intimidation. He’s got this double-punch of being so seductive and yet so capable of being frightening in the force of his intellect, his way with words, and his physical heft. I was looking for an actor with those qualities who could also handle the soliloquy at the end, and an old school New Yorker… it’s not a really long list. He’s at the top of it.

We never even discussed Trump. Never once. We talked about Lee J. Cobb in 12 Angry Men. We talked about Darth Vader, meaning Paul (Willem Dafoe) as Obi-Wan Kenobi, Moses Randolph as Anakin Skywalker, who as Paul says, they were going to fix the world together. They were geniuses and Moses went to the dark side and now his awesome talent is being applied in a dark way. We discussed the scene in the model room in the office as Luke with Darth Vader saying, “Join me.” We talked about power that cloaks itself and Alec was pulled in because it’s the antithesis of his Trump satire. To me the two parts are practically unrelated, it’s just that Alec is one of the few actors who has the chops. It’s not like his pal Jerry Seinfeld is also doing the Tom Hanks part in Philadelphia.

Motherless Brooklyn is now in theaters.