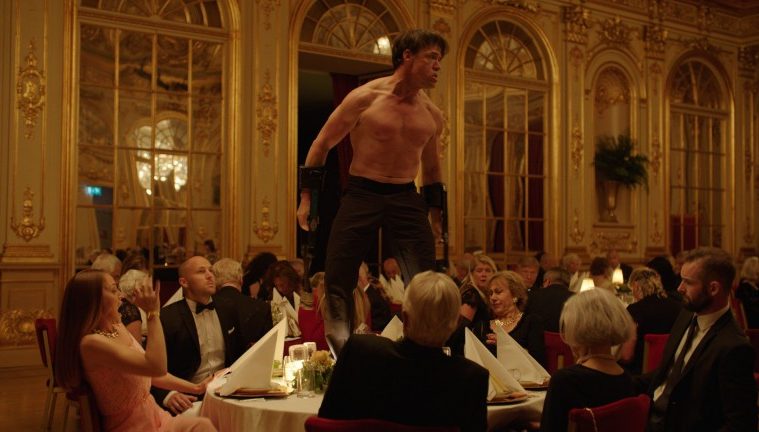 After exploring a fractured relationship in the formally precise, deeply funny Force Majeure, Ruben Östlund is back this year with The Square. The film follows an ambitious museum director (Claes Bang), who is preparing to make a major impact with a new exhibit. Ahead of a likely Cannes debut and U.S. release from Magnolia, the first images have arrived, along with a behind-the-scenes look at its creation.

Also starring Elisabeth Moss and Dominic West, the exhibit in the film is meant to provide “a symbolic space where only good things can happen.” Things escalate and get wildly out of hand when the PR firm in charge come up with some far-reaching publicity plans. “The Square can be interpreted as an allegory of how society works today. It seems that we’re getting more and more individualistic and we tend to see other adults as a potential threat. Overall, we’re less inclined to feel responsible for one another,” Ostlund says.

Check out the synopsis below, along with the first two images and behind the scenes videos from the production company Plattform Produktion, with many more at that link.

THE SQUARE is set in a renowned museum where an artist exhibits an installation meant to promote altruism, providing people with a symbolic space where only good things can happen. The movie’s protagonist is the manager of the museum who hires a ruthless PR firm to build some buzz around the installation but things get out of hand when the museum’s PR team goes too far with their publicity plans, sparking a public uproar and exposing the hypocrisy of the media. Moss will play a reporter who is on the beat of the exhibit.

The Square – shooting so far in 15 secounds. Fantastic behind the scene photos by light designer Tobias Henriksson.

The Square – last shooting day for Annica, first one for Elisabeth.

Set designer, Josefin Åsberg tslks about the studio set up.

A post shared by Ruben Östlunds The Square (@plattformproduktion) on Jul 2, 2016 at 5:31am PDT

A post shared by Ruben Östlunds The Square (@plattformproduktion) on Jul 4, 2016 at 9:07am PDT

A post shared by Ruben Östlunds The Square (@plattformproduktion) on Oct 7, 2016 at 4:18am PDT

The press conference scene with stolen character from #siggeeklund and #alexschulman podcast.