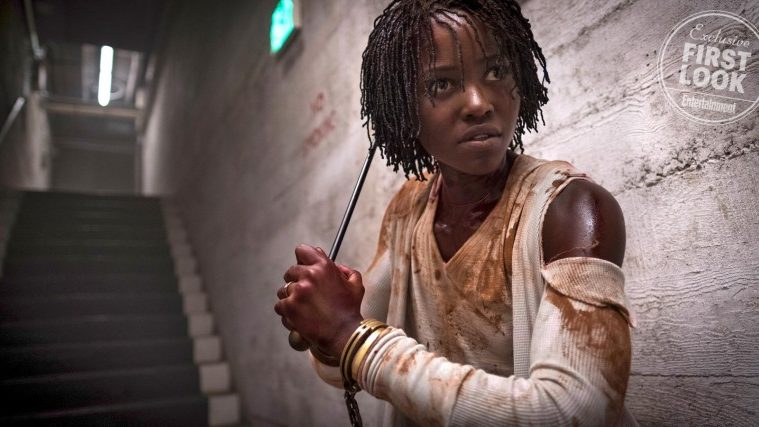 After the astounding success that was Get Out, Jordan Peele is returning this spring with his highly-anticipated follow-up, Us. Starring Lupita Nyong’o, Winston Duke, Elisabeth Moss, and Tim Heidecker, the trailer for the thriller will land on Christmas Day, but today the first images have arrived, alongside a wealth of new plot details. Courtesy of EW, see the new synopsis below:

The story is set in the present day and follows Adelaide and Gabe Wilson (Lupita Nyong’o and Winston Duke) as they take their kids to Adelaide’s old childhood beachside home in Northern California for the summer. After a day at the beach with the Tyler family (which includes Elisabeth Moss and Tim Heidecker), Adelaide — who’s haunted by a lingering trauma from her past — becomes increasingly more paranoid that something bad will happen to her family. As night falls, the Wilsons see four figures holding hands and standing silently at the bottom of their driveway… (Did shivers just go up your spine?)

“For my second feature, I wanted to create a monster mythology,” Peele told EW. “I wanted to do something that was more firmly in the horror genre but still held on to my love of movies that are twisted but fun.” Perhaps the best hint yet at what to expect are the 10 films Peele gave Nyong’o to watch in preparation of shooting: Dead Again, The Shining, The Babadook, It Follows, A Tale of Two Sisters, The Birds, Funny Games, Martyrs, Let the Right One In, and The Sixth Sense.

As we await the trailer, check out the new images above and below, along with a new poster.