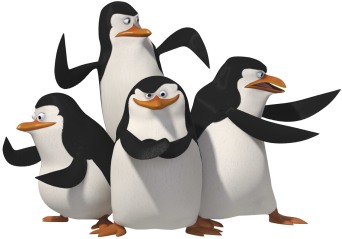 DreamWorks has two new projects entering its pipeline: a spin-off film based on the penguins from Madagascar, and project focusing on the last days of the last photolab to develop Kodachrome film. [THR]

The studio bought Jonathan Tropper‘s pitch for the Kodachrome project, to be scripted by Tropper based on an article by the New York Times writer A.G. Sulzberger. Kodachrome color reversal film was manufactured for 74 years in a variety of types including 8mm, Super 8, 16mm, 35mm, and large formats for still photography. It was widely admired for its archive quality and was immortalized by Paul Simon in his famous pop song of the same name. (And if you’re not up on your 70’s pop tunes, the song was featured in a montage sequence in The Coneheads movie.)

The Kodachrome project is being developed by 21 Laps Entertainment, whose co-partner Night at the Museum director Shawn Levy may helm the picture.

Megamind writers Alan J. Schoolcraft and Brent Simons have been hired to script a spin-off flick for the famous

Madagascar penguins. The mischievous flightless waterfowl stole their scenes and were the best part of the two Madagascar movies,  as evidence by their prominent use in the marketing for those films.

Besides starring in their own short, The Madagascar Penguins in a Christmas Caper, the slightly sociopathic, paramilitary foursome of Skipper, Kowalski, Private and Rico also have their own animated CGI series on Nickelodeon. The Penguins of Madagascar, now in its second season, was 2010’s second most-watched animated show on Nick, finishing behind SpongeBob SquarePants for viewers aged 2-11.

So far there is no word on who might be directing (or co-directing) the film, but this one could prove to be a big kid-friendly hit for DreamWorks as well as a potential franchise. More news at this one develops.

Which of these project do you think would make a better movie? And, going off a slight tangent, is the time right for another Coneheads movie? Coneheads meet the Penguins? Discuss.