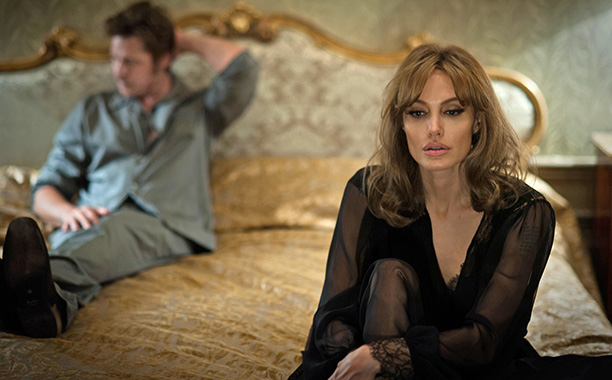 While there’s still a few months to go before Angelina Jolie debuts her sophomore directorial effort, Unbroken, she’s already begun production on her next film, the intimate drama By the Sea. Co-starring alongside her husband, Brad Pitt, Jolie also scripted the feature, which follows them as a couple on a getaway in 1970’s France.

Ahead of what’s surely a paparazzi free-for-all, the first official images have now debuted just days after production kicked off in Malta. Per EW, the story specifically finds Jolie as Vanessa, a former dancer and Pitt as Roland, a writer, both entangled in a crumbling marriage as they find rejuvenation after coming across a quiet, seaside village.

“I chose to set By the Sea in the 1970s, not only because it is a colorful and alluring era, but because it removes many of the distractions of contemporary life and allows the focus to remain squarely on the emotions that the characters experience in their journey,” Jolie tells the magazine. Perhaps the most intriguing aspect about the project is the involvement of cinematographer Christian Berger, a longtime Michael Haneke collaborator. While these promotional stills don’t reflect his actual work, mostly natural lighting is said to be employed. Check out the stills above and below for the film that will continue shooting through November. Also starring Niels Arestrup, Richard Bohringer, and Melanie Laurent, By the Sea will likely be released next year.