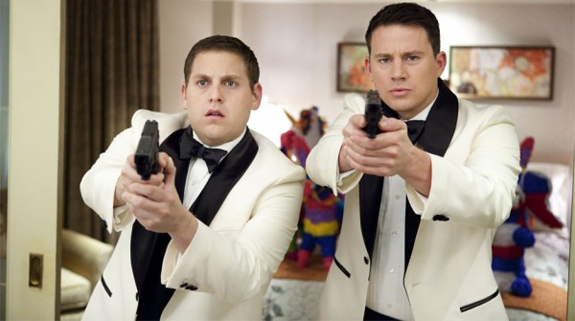 The first trailer for Jonah Hill and Channing Tatum‘s 21 Jump Street update is here and it is obscenely long, clocking in at over 3 minutes and giving away many jokes. With that said, at least most of the jokes seem funny. Cloudy With a Chance of Meatballs directors Phil Lord and Chris Miller are making their live-action debut with cast also including Ellie Kemper, Rob Riggle, Dave Franco, Ice Cube, Brie Larson Johnny Simmons, Dakota Johnson, Jake M. Johnson and DeRay Davis.

It has previously been described as “a John Hughes movie with Bad Boys style action,” and while it doesn’t seem to excel in either of those areas, I like the style they are going for. It was also great to see Parks and Recreation’s Ron Swanson aka Nick Offerman and although he had no part here, the humor definitely seems to come from the Judd Apatow camp as well. Check out the red band trailer below featuring a skinny Jonah Hill. In the action-comedy 21 Jump Street, Schmidt (Jonah Hill) and Jenko (Channing Tatum) are more than ready to leave their adolescent problems behind. Joining the police force and the secret Jump Street unit, they use their youthful appearances to go undercover in a local high school. As they trade in their guns and badges for backpacks, Schmidt and Jenko risk their lives to investigate a violent and dangerous drug ring. But they find that high school is nothing like they left it just a few years earlier – and neither expects that they will have to confront the terror and anxiety of being a teenager again and all the issues they thought they had left behind.