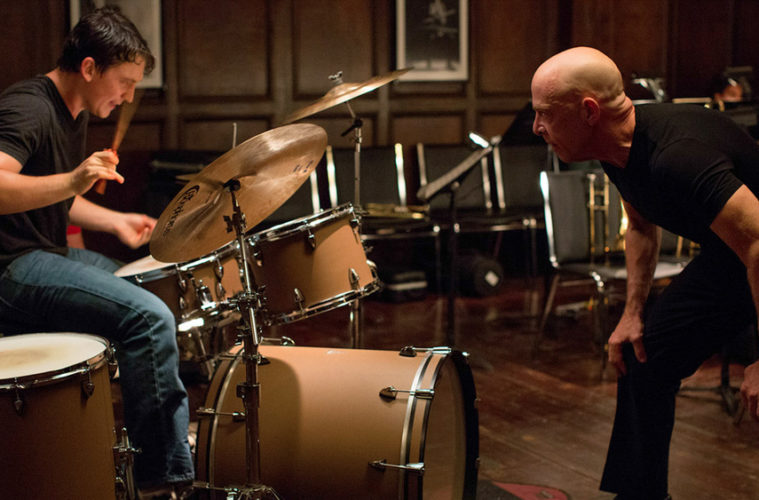 Concluding today is the 30th Sundance Film Festival and while we’ve still got a handful of reviews and features to come, they’ve announced their jury and audience winners. Topping the list is Damien Chazelle‘s opening night drama Whiplash, which we tried to see to no avail, and features Miles Teller as a young drummer, with Sony Pictures Classics set to release it sometime later this year. Other winners included Rich Hill (review), Fishing Without Nets (review) and Kumiko, the Treasure Hunter (review). Check out everything below and click here for our complete coverage.

The U.S. Grand Jury Prize: Dramatic was presented by Leonard Maltin to:
Whiplash / U.S.A. (Director and screenwriter: Damien Chazelle) — Under the direction of a ruthless instructor, a talented young drummer begins to pursue perfection at any cost, even his humanity. Cast: Miles Teller, JK Simmons.

The World Cinema Grand Jury Prize: Documentary was presented by Andrea Nix Fine to:
Return to Homs / Syria, Germany (Director: Talal Derki) — Basset Sarout, the 19-year-old national football team goalkeeper, becomes a demonstration leader and singer, and then a fighter. Ossama, a 24-year-old renowned citizen cameraman, is critical, a pacifist, and ironic until he is detained by the regime’s security forces.

The Audience Award: U.S. Documentary Presented by Acura, was presented by William H. Macy to:
Alive Inside: A Story of Music & Memory / U.S.A. (Director: Michael Rossato-Bennett) — Five million Americans suffer from Alzheimer’s disease and dementia—many of them alone in nursing homes. A man with a simple idea discovers that songs embedded deep in memory can ease pain and awaken these fading minds. Joy and life are resuscitated, and our cultural fears over aging are confronted.

The Audience Award: U.S. Dramatic Presented by Acura, was presented by William H. Macy to:
Whiplash / U.S.A. (Director and screenwriter: Damien Chazelle) — Under the direction of a ruthless instructor, a talented young drummer begins to pursue perfection at any cost, even his humanity. Cast: Miles Teller, JK Simmons.

The Audience Award: World Cinema Documentary was presented by Felicity Huffman to:
The Green Prince / Germany, Israel, United Kingdom (Director: Nadav Schirman ) — This real-life thriller tells the story of one of Israel’s prized intelligence sources, recruited to spy on his own people for more than a decade. Focusing on the complex relationship with his handler, The Green Prince is a gripping account of terror, betrayal, and unthinkable choices, along with a friendship that defies all boundaries.

The Audience Award: World Cinema Dramatic was presented by Felicity Huffman to:
Difret / Ethiopia (Director and screenwriter: Zeresenay Berhane Mehari) — Meaza Ashenafi is a young lawyer who operates under the government’s radar helping women and children until one young girl’s legal case exposes everything, threatening not only her career but her survival. Cast: Meron Getnet, Tizita Hagere.

The Audience Award: Best of NEXT <=> was presented by Nick Offerman to:
Imperial Dreams / U.S.A. (Director: Malik Vitthal, Screenwriters: Malik Vitthal, Ismet Prcic) — A 21-year-old, reformed gangster’s devotion to his family and his future are put to the test when he is released from prison and returns to his old stomping grounds in Watts, Los Angeles. Cast: John Boyega, Rotimi Akinosho, Glenn Plummer, Keke Palmer, De’aundre Bonds.

The Directing Award: U.S. Documentary was presented by Morgan Neville to:
Ben Cotner & Ryan White for The Case Against 8 / U.S.A. (Directors: Ben Cotner, Ryan White) — A behind-the-scenes look inside the case to overturn California’s ban on same-sex marriage. Shot over five years, the film follows the unlikely team that took the first federal marriage equality lawsuit to the U.S. Supreme Court.

The Directing Award: World Cinema Documentary was presented by Sally Riley to:
Iain Forsyth & Jane Pollard for 20,000 Days On Earth / United Kingdom (Directors: Iain Forsyth & Jane Pollard) — Drama and reality combine in a fictitious 24 hours in the life of musician and international culture icon Nick Cave. With startlingly frank insights and an intimate portrayal of the artistic process, this film examines what makes us who we are and celebrates the transformative power of the creative spirit.

The Directing Award: World Cinema Dramatic was presented by Sebastián Lelio to:
Sophie Hyde for 52 Tuesdays / Australia (Director: Sophie Hyde, Screenplay and story by: Matthew Cormack, Story by: Sophie Hyde) — Sixteen-year-old Billie’s reluctant path to independence is accelerated when her mother reveals plans for gender transition, and their time together becomes limited to Tuesdays. This emotionally charged story of desire, responsibility, and transformation was filmed over the course of a year—once a week, every week, only on Tuesdays. Cast: Tilda Cobham-Hervey, Del Herbert-Jane, Imogen Archer, Mario Späte, Beau Williams, Sam Althuizen.

The Waldo Salt Screenwriting Award: U.S. Dramatic was presented by Peter Saraf to:
Craig Johnson & Mark Heyman for The Skeleton Twins / U.S.A. (Director: Craig Johnson, Screenwriters: Craig Johnson, Mark Heyman) — When estranged twins Maggie and Milo feel that they’re at the end of their ropes, an unexpected reunion forces them to confront why their lives went so wrong. As the twins reconnect, they realize the key to fixing their lives may just lie in repairing their relationship. Cast: Bill Hader, Kristen Wiig, Luke Wilson, Ty Burrell, Boyd Holbrook, Joanna Gleason.

The Screenwriting Award: World Cinema Dramatic was presented by Sebastián Lelio to:
Eskil Vogt for Blind / Norway, Netherlands (Director and screenwriter: Eskil Vogt) — Having recently lost her sight, Ingrid retreats to the safety of her home—a place she can feel in control, alone with her husband and her thoughts. But Ingrid’s real problems lie within, not beyond the walls of her apartment, and her deepest fears and repressed fantasies soon take over. Cast: Ellen Dorrit Petersen, Henrik Rafaelsen, Vera Vitali, Marius Kolbenstvedt.

The Editing Award: U.S. Documentary was presented by Jonathan Oppenheim to:
Jenny Golden, Karen Sim for Watchers of the Sky / U.S.A. (Director: Edet Belzberg) — Five interwoven stories of remarkable courage from Nuremberg to Rwanda, from Darfur to Syria, and from apathy to action.

The Editing Award: World Cinema Documentary was presented by Sally Riley to:
Jonathan Amos for 20,000 Days On Earth / United Kingdom (Directors: Iain Forsyth & Jane Pollard) — Drama and reality combine in a fictitious 24 hours in the life of musician and international culture icon Nick Cave. With startlingly frank insights and an intimate portrayal of the artistic process, this film examines what makes us who we are and celebrates the transformative power of the creative spirit.

The Cinematography Award: U.S. Documentary was presented by Kahane Cooperman to:
Rachel Beth Anderson, Ross Kauffman for E-TEAM / U.S.A. (Directors: Katy Chevigny, Ross Kauffman) — E-TEAM is driven by the high-stakes investigative work of four intrepid human rights workers, offering a rare look at their lives at home and their dramatic work in the field.

The Cinematography Award: U.S. Dramatic was presented by Peter Saraf to:
Christopher Blauvelt for Low Down / U.S.A. (Director: Jeff Preiss, Screenwriters: Amy-Jo Albany, Topper Lilien) — Based on Amy-Jo Albany’s memoir,Low Down explores her heart-wrenching journey to adulthood while being raised by her father, bebop pianist Joe Albany, as he teeters between incarceration and addiction in the urban decay and waning bohemia of Hollywood in the 1970s. Cast: John Hawkes, Elle Fanning, Glenn Close, Lena Headey, Peter Dinklage, Flea.

The Cinematography Award: World Cinema Documentary was presented by Caspar Sonnen to:
Thomas Balmès & Nina Bernfeld for Happiness / France, Finland (Director: Thomas Balmès) — Peyangki is a dreamy and solitary eight-year-old monk living in Laya, a Bhutanese village perched high in the Himalayas. Soon the world will come to him: the village is about to be connected to electricity, and the first television will flicker on before Peyangki’s eyes.

The Cinematography Award: World Cinema Dramatic was presented by Carlo Chatrian to:
Ula Pontikos for Lilting / United Kingdom (Director and screenwriter: Hong Khaou) — The world of a Chinese mother mourning the untimely death of her son is suddenly disrupted by the presence of a stranger who doesn’t speak her language. Lilting is a touching and intimate film about finding the things that bring us together. Cast: Ben Whishaw, Pei-Pei Cheng, Andrew Leung, Peter Bowles, Naomi Christie, Morven Christie.

A U.S. Documentary Special Jury Award for Use of Animation was presented by Charlotte Cook to:
Watchers of the Sky / U.S.A. (Director: Edet Belzberg) — Five interwoven stories of remarkable courage from Nuremberg to Rwanda, from Darfur to Syria, and from apathy to action.

A U.S. Documentary Special Jury Award for Intuitive Filmmaking was presented by Charlotte Cook to:
The Overnighters / U.S.A. (Director: Jesse Moss) — Desperate, broken men chase their dreams and run from their demons in the North Dakota oil fields. A local Pastor’s decision to help them has extraordinary and unexpected consequences.

A U.S. Dramatic Special Jury Award for Musical Score was presented by Dana Stevens to:
The Octopus Project for Kumiko, the Treasure Hunter / U.S.A. (Director: David Zellner, Screenwriters: David Zellner, Nathan Zellner) — A lonely Japanese woman becomes convinced that a satchel of money buried in a fictional film is, in fact, real. Abandoning her structured life in Tokyo for the frozen Minnesota wilderness, she embarks on an impulsive quest to search for her lost mythical fortune. Cast: Rinko Kikuchi.

A World Cinema Dramatic Special Jury Award for the Delightful Ensemble Performance, and How the Director Brought His Own Unique Universe into Cinema was presented by Carlo Chatrian to:
God Help the Girl / United Kingdom (Director and screenwriter: Stuart Murdoch) — This musical from Stuart Murdoch of Belle & Sebastian is about some messed up boys and girls and the music they made. Cast: Emily Browning, Olly Alexander, Hannah Murray, Pierre Boulanger, Cora Bissett.

A World Cinema Documentary Special Jury Award for Cinematic Bravery was presented by Caspar Sonnen to:
We Come as Friends / France, Austria (Director: Hubert Sauper) — We Come as Friends is a modern odyssey, a science fiction–like journey in a tiny homemade flying machine into the heart of Africa. At the moment when the Sudan, Africa’s biggest country, is being divided into two nations, a “civilizing” pathology transcends the headlines—colonialism, imperialism, and yet-another holy war over resources.

The Short Film Audience Award, Presented by YouTube, based on web traffic for 15 short films that screened at the Festival and were concurrently featured on www.youtube.com/sff, was presented to:
Chapel Perilous / U.S.A. (Director and screenwriter: Matthew Lessner) — Levi Gold is paid an unexpected visit by Robin, a door-to-door salesman with nothing to sell. The ensuing encounter forces Levi to confront his true mystical calling, and the nature of reality itself. A metaphysical comedy trip-out with Sun Araw.

The following awards were presented at separate ceremonies at the Festival:

The winning directors and projects of the Sundance Institute | Mahindra Global Filmmaking Awards, in recognition and support of emerging independent filmmakers from around the world, are: Hong Khaou, Monsoon (Vietnam/UK); Tobias Lindholm, A War (Denmark); Ashlee Page, Archive(Australia); and Neeraj Ghaywan, Fly Away Solo (India).

The 2014 Red Crown Producer’s Award and $10,000 grant was presented to Elisabeth Holm, producer of Obvious Child.

The 2014 Alfred P. Sloan Feature Film Prize, presented to outstanding feature films focusing on science or technology as a theme, or depicting a scientist, engineer or mathematician as a major character, was presented to I Origins, directed and written by Mike Cahill. The film received a $20,000 cash award from the Alfred P. Sloan Foundation.

What do you think of the winners? Which films are you most looking forward?