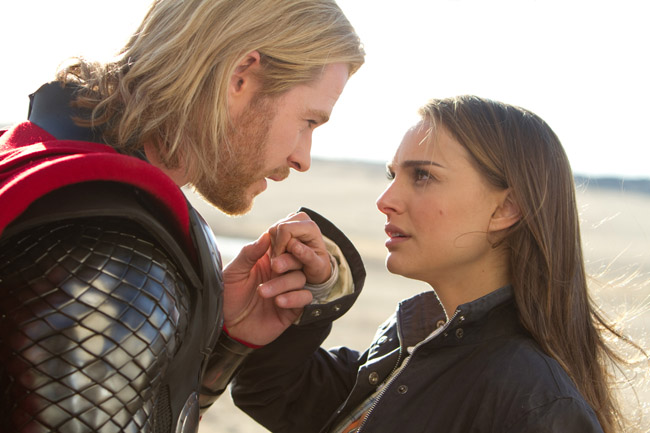 After Fast Five kicked off the summer season in a big way last weekend, the first of the comic-book films has arrived. Marvel Studios launched their new franchise and another piece to The Avengers puzzle with Kenneth Branagh‘s Thor. The blockbuster grabbed a respectable $66 million, less than Spider-Man and Iron Man. Due to a staggered worldwide release, it has already netted over $200 million globally. In second place was Justin Lin‘s Fast Five, with a 62.3% drop, grabbing $32.5m for an almost $140m domestic total.

In the alternative blockbuster market, Jumping the Broom and Something Borrowed each netted around $13-$14m, for 3rd and 4th place, respectively. In children’s fare, Rio added $8.2m for an impressive $114.9m total. Disney’s Prom continued to tank, only reaching $7.8m total in its second weekend. Hoodwinked Too! Hood vs. Evil just snuck into the top 10 with $1.8m for a $6.7m total.

Mel Gibson‘s return to acting, The Beaver, was the big independent release this weekend, but it debuted to middling results. Jodie Foster‘s drama grabbed $104k from 22 theaters for a mediocre $4,727 per-theater-average. Mickey Rourke, Bill Murray, and Megan Fox‘s Passion Play, which got horrendous reviews at TIFF, debuted to a terrible $2,060 in only two theaters.

Next weekend sees the wide release of Priest and Bridesmaids, but expect both to fall short of Thor‘s second weekend. The notable limited releases is the Joseph Gordon-Levitt, Rainn Wilson, and Natalie Portman indie Hesher, as well as Will Ferrell‘s dramatic turn in Everything Must Go.

Did you see Thor this weekend? What do you think will nab second place next weekend? Bridesmaids or Priest? Or will Fast Five stay in gear?