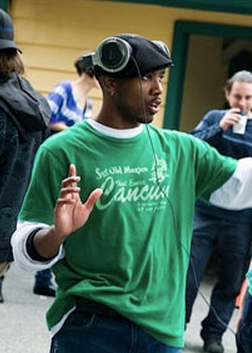 It’s been quite a while — November of 2011, in fact — since we last reported on the once-promising Tupac Shakur biopic. It wasn’t good news: John Singleton, who’d apparently swiped the project from Antoine Fuqua with the goal of bringing it to fruition, left the project just a month after he was first said to have been involved in negotiations.

However, with an impromptu report from Sundance, Deadline has brought the project back into the conversation, saying that screenwriter Michael Starrbury — who wrote The Inevitable Defeat of Mister and Pete, which will premiere at the festival in five days — has been hired to rewrite the screenplay. Originally scribed by Steve Bagatourian, Stephen Rivele, and Christopher Wilkinson, the project clearly hit an unfortunate no-man’s-land after Singleton dropped off, and it perhaps says something about the quality of The Inevitable Defeat of Mister and Pete that Morgan Creek Productions is willing to gamble on Starrbury (whose only previous writing credits include a couple of shorts and a 2011 TV movie called Black Jack).

Indeed, the Deadline piece makes a point of saying that “even though [the film] doesn’t premiere until January 25,” it’s still “generating a lot of interest” throughout the festival already, perhaps as a result of an “advance look” screening to volunteer crowds that occurred on January 17. Directed by George Tillman Jr. (Men of Honor, Notorious), The Inevitable Defeat of Mister and Pete sports an authentic-sounding premise and a cast that features two of the most rock-solid veterans any on-the-rise screenwriter could possibly hope for: Anthony Mackie and Jeffrey Wright.

Starrbury’s profile is also boosted by the fact that he’s “currently finishing up” his adaptation of the graphic novel The Great Unknown, which will be helmed by MacGruber director Jorma Taccone. As promising as this all sounds for the revival of the Tupac film, though, let’s hope that the director position gets squared away soon enough, or else we may end up right where we left off back in late 2011.

Are you happy that the Tupac biopic has been revived? Who would you like to see direct the Starrbury screenplay?