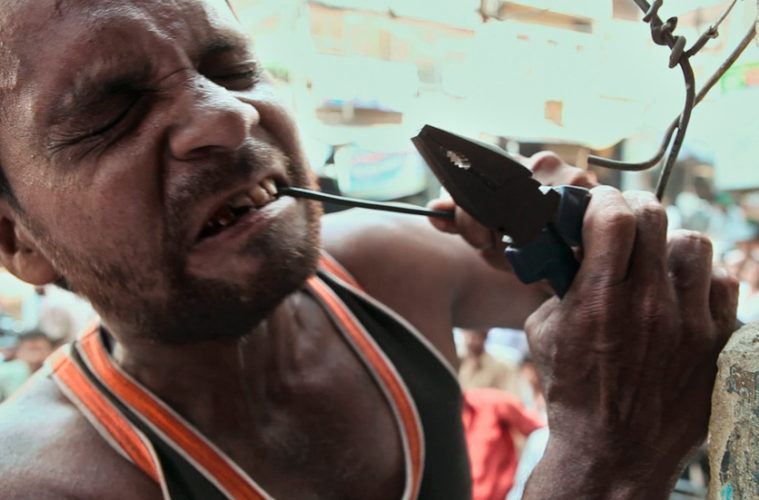 Kanpur, India is known as the Manchester of the East; an industrial town in the North, it’s grappling with the realities of globalization, embodying the fundamental paradox that outsiders attempt to unpack when they take their cameras to India. While the nation has a growing middle class there are still many who are poor, living in third world conditions. Bollywood, the dream factory heavily influenced with Western culture, never ventures to these parts, yet Powerless, an alarmingly fascinating and balanced documentary by Fahad Mustafa and Deepti Kakkar explores both sides of Kanpur, as the local electric utility plays a game of cat and mouse with those illegally tapping generators.

Front and center is KESCO, the energy provider and its chief executive Ritu Aheshwar; she takes over the utility providing easy bill pay and amnesty for those that haven’t paid their power bills. She’s met with protest, making changes that don’t exactly transform or fix the problem; instead KESCO installs low capacity generators that become hazards if over extended by illegal connections. The solution as KESCO hemorrhages money is rolling blackouts in Kanpur, leading to the problem of pollution by toxic diesel generators, as industrial production must continue. Powerless is told like a Michael Glawogger film, though the use of several narrators and with compositions blending narrative and documentary traditions. At times it’s a beautiful looking work as we spend a lot of time with Aheshwari, a female executive who worked her way up the ranks in government service, and Loka Singh, who illegally taps into the generators without fear (and often without the kinds of gloves you’d expect an electrician to have). The film documents just one paradox; one that mainstream Indian cinema has shown little interest. Although I’m not a student of Bollywood films, I can only think of two that deal with inequality – both though the lens of scientists solving these problems and each are wonderful and worth seeking out: Rajkumar Hirani’s Three Idiots (2009) and Ashutosh Gowariker’s Swades (2004).

Powerless is a successful documentary, engaging in assessment of an issue for which there is no easy answer and no viable method of enforcement. Alive and spirited with an excellent narrative structure, it doesn’t offer a solution, only the reality of this catch 22; of KESCO has no funding to acquire energy for distribution, supply becomes scarce driving up the cost, especially during the summer. The amateur electricians function almost like the cable guy who, on the side, can deactivate a switch so you can watch premium channels for free, and while they are certainly not 100% of the problem, they are vital part of the story.