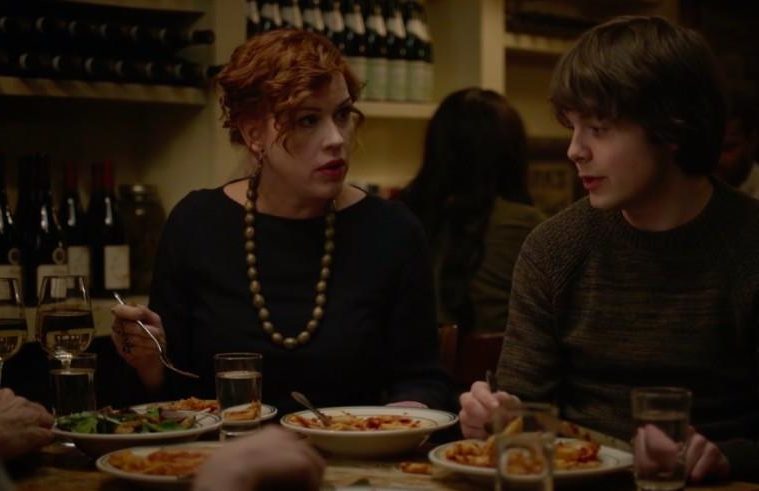 Tribeca Review: ‘All These Small Moments’ Adds Up to an Unwieldy Whole

It’s called All These Small Moments for a reason — one that becomes clear with a final, out-of-nowhere moment of voiceover narration in case you hadn’t figured it out yourself by acknowledging how formative, complex, and emotionally draining each one of writer/director Melissa B. Miller-Costanzo’s dense scenes prove. Whether her current focal point is young Howie Sheffield (Brendan Meyer), one of the other teenagers at her disposal, the older object of his affection (Jemima Kirke’s Odessa), or his on-the-brink-of-divorce parents (Molly Ringwald’s Carla and Brian d’Arcy James’ Tom), you know each vignette will pack a surprisingly potent punch. The question becomes whether they earn that potency or culminate into something greater than their individual selves. And while I may lean towards “No,” the whole is still worth a look.

The film appears to want to work as a story from Howie’s singular vantage. It plays as though these are the specific moments that occurred during a volatile period of his life to shape the man he will inevitably become — one that we never meet or begin to assume to know. Having the aforementioned instance of narration at its end would make it seem as though it succeeded, yet there’s a lot that occurs before it that he doesn’t witness. I’ll admit to finding this incongruity impossible to ignore at first. Eventually, however, I realized I didn’t have to ignore it. Because just like many of these moments impact Howie, they will also become crucial memories for those with which he shared them. This truth demands additional context. It’s therefore not enough to merely see his parents’ crumbling relationship through his eyes. He doesn’t know every detail of what they’re going through and as such could color the players as though they are engaged in a fight between good and evil — scorned and scorner. That may be enough to facilitate his increasingly hostile attitude towards his parents, but it doesn’t leave room to understand Miller-Costanzo’s seemingly obvious desire to expose our lives as the unpredictable and messy adventures they are. She instills a wonderfully analogous dynamic to everything that is happening so that nothing unfolds in a vacuum. Scenes that arrive without warning may give you pause in the moment, but their inclusion is not arbitrary. They may render the whole unwieldy, but life often is.

She doesn’t want Carla and Tom to be punch lines. They’re just as important as Howie and their failings, frustrations, and awkwardness just as resonant. The same goes for the women in this boy’s life: the older object of his lust in Odessa and the age-appropriate classmate who has a crush on him (Harley Quinn Smith’s Lindsay). Whereas many coming-of-age dramedies like this one (but written by men) would draw them as pawns pushing his trajectory forward without including any heft to their own existences, Miller-Costanzo is very cognizant about their troubles too. So even though Lindsay’s introduction and affection feels forced in its sudden appearance, we recognize her role in his maturity and her past’s role in hers. While her actions impact Howie, she acts for herself.

This is done more effectively with Odessa thanks to Kirke’s nuanced performance as more than ingénue. We smile as she does upon hearing Howie’s friends mock him for his infatuation. She appreciates his attention not because she’s a flirt or a predator, but because she has her own drama to deal with — things that have cultivated a sense of depression and perhaps hopelessness. She embraces his affection because it is given freely. She returns it because it is pure. This character of Odessa becomes a sort of bridge between Howie’s struggles and those of his parents. She has a foot in both their worlds, the line that separates his innocence and optimism from their responsibilities and jaded pessimism blurred. Her actions are therefore sweetly misguided in their authenticity.

Authenticity of character is All These Small Moments‘ strongest suit because each proves honest whether or not their inclusion in the larger story does. If the film wasn’t trying so hard to make Howie its lead despite spending so much time in the headspaces of those around him, I think it could be great. What we’re given is an ensemble drama that only scratches at the surface of its most interesting pieces. That’s not to say Howie isn’t interesting, he just seems like the cipher connecting everyone rather than the focus that the film presumes. We start to care about the others more. Making him the nucleus means all those great instances of individual humanistic complexity by the others mean less when solely presented in context to him.

Thankfully we can still see their power removed from Howie too. Just because the other characters come and go depending on his story’s needs doesn’t mean we don’t remember them as three-dimensional individuals worthy of their own spin-off showcase. We can instead appreciate the effectiveness of Kirke, Ringwald, and James’ performances as related to their personal trajectories. We can appreciate Smith’s Lindsay as someone who needs Howie’s presence rather than he hers. She’s showing him there’s always more than meets the eye while also self-confirming that she’s strong enough to stop her present from being sabotaged by her past. Miller-Costanzo is allowing every single person onscreen a path towards growth, recognition, and self-awareness. Howie might be in the foreground, but he never feels more vital than the rest.

All These Small Moments premiered at the Tribeca Film Festival and opens on January 18.