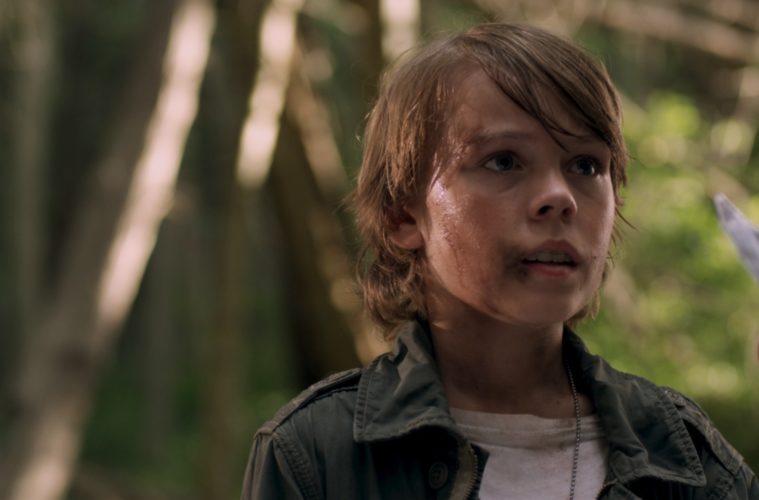 Although countless action films hit theaters every year, rarely do any put weapons in the hands of kids. A new upcoming film doesn’t quite do that, but it gets very creative in its execution. Coming from Drafthouse Films this summer, I Declare War was a major hit at Fantastic Fest last year, bringing home the audience award and now the first trailer has landed.

Following a group of boys in the woods, playing an epic game of capture-the-flag, they carry it out in the way many of us have likely done growing up. But the twist here is that the filmmakers put us into their mindset, creating an all-out war as bazookas, guns and more get created from mere tree branches. Directed by Jason Lapeyre and Robert Wilson, check out the entertaining trailer and poster below for the film starring Siam Yu, Gage Munroe, Michael Friend, Aidan Gouveia, Mackenzie Munro, Alex Cardillo and more. Armed with nothing more than twigs, their imaginations and a simple set of rules, a group of 12-year-olds engaged in a lively game of Capture the Flag in the neighborhood woods start dangerously blurring the lines between make-believe and reality. Rocks = Grenades. Trees = Control towers. Sticks = Submachine guns. The youthful innocence of the game gradually takes on a different tone as the quest for victory pushes the boundaries of friendship. The would-be warriors get a searing glimpse of humanity’s dark side as their combat scenario takes them beyond the rules of the game and into an adventure where fantasy combat clashes with the real world.

I Declare War hits VOD on July 26th and in theaters on August 30th.