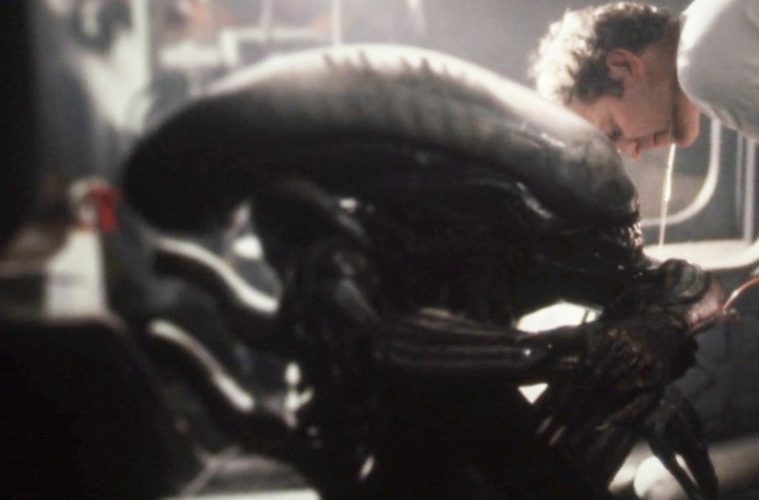 Exploring the Making of a Sci-Fi Masterpiece with ‘Memory: The Origins of Alien’ Director Alexandre O. Philippe

For four decades, the world, characters, and mythology of Alien have permeated the minds (and nightmares) of film fans across the globe. In his latest documentary, director Alexandre O. Philippe looks at all the art and history that influenced young Dan O’Bannon, scribe of the 1979 horror classic, and how the film forever captured and changed the mindset of the public.

The documentary takes fans on an exploration of the mythical underpinnings of Alien, supported by exclusive behind-the-scenes footage, unearthing the largely untold origin story behind Ridley Scott‘s cinematic masterpiece, and reveals a treasure trove of never-before-seen materials from the archives of “Alien” creators Dan O’Bannon and H.R. Giger–including original story notes, rejected designs and storyboards, and O’Bannon’s original 29 page script from 1971, titled “Memory.”

At Fantastic Fest, we sat down with the director to find out what went into this documentary and touched on the scenes and themes in Alien that mean the most to him.

The Film Stage: What I like about your style and presentation is that this is not just a bunch of talking heads, and you really get insight from all sorts of personalities. Beyond that, you use props and equipment to make this feel like an extension of the film. Where in the process did you decide to make these creative decisions?

Alexandre O. Philippe: This kind of style is something that’s evident from the very beginning, and I do not start anything until I am clear on my approach, and the visual style I want to use. The structure is something I spend a lot of time on because that informs pretty much everything moving forward. Thankfully the style of every one of the documentaries I’ve made comes to me almost immediately, and then we have to figure out how to make it work.

Help me clear something up front: I’ve heard H.R. Giger pronounced different ways. What is the correct way?

[Laughs] Say it like there are three Es in his name.

The beginning of the documentary talks about how we as an audience and a culture have embraced this cinematic nightmare. How do you feel about Alien, and the mark it’s left on us? What scares you, and what kind of film fan are you?

The way I see it, the nightmare of Alien is what we needed to see, but not the nightmare that we wanted. In 1979, I think people really wanted a different kind of alien. When you look at what was working in the box office, it was running counter-current to Alien. So, to me, what is so remarkable about the film and that property is that people weren’t sure they wanted to see, but it connected with our subconscious in a very powerful way–that’s what makes the movie so unique.

I’ve been into horror films pretty much since I was a kid. And horror, at its best, is a phenomenal genre because it’s a genre that makes you look into a dark mirror and confront your own fears. Fear is such a powerful emotion that if you can understand what you’re afraid of, you can start understanding yourself. That’s what makes horror–when it’s great horror–so important as a genre.

Alien was more than the sum of its parts. As a filmmaker, how do your creative elements come together in a way you ever expected?

The most important job of the director is to surround him or herself with the right people. I think that’s very true for all of us. Films are not made in a vacuum, and while there is a stamp that is very much mine on the films I’ve made, there is also the stamp of our editor, and the stamp of our composer, and our producer, and cinematographer. I’m so grateful that we have a team now who is very much in tune with one other. I don’t need to explain what I need. They know what I want, and they know how to make it better. It’s fun, but it took me several years initially to find the right team. Once you find the right people, you pretty much stick with them.

To embark on an Alien doc, I imagine you’d really have to be a fan. Otherwise, this might have seemed overwhelming. What is your first memory of Alien?

The first memory I have is actually the poster. I had a friend in Geneva–where I grew up–who had the original one-sheet poster and that tagline is just mesmerizing. It really taps into the fear of the unknown and creates an immediate effect of dread. You want to watch the film but you’re terrified to see it. So I waited a few years until I saw it for the first time. It was on VHS, but it completely blew me away, and I’ve never looked back. I’ve watched it over and over again, and it’s one of the films I go back to constantly.

The one scene which is so iconic, and one you devote a lot of screen time to, is the “chestburster” scene. Are there others that equally captivated you?

For shock value, and residual impact, the chestburster is very tough to beat. But when I started work on this, I hoped to look very specifically at that sequence and see if I could deconstruct it the same way I did with that iconic scene from Psycho in my last doc, 78/52: Hitchcock’s Shower Scene. That was the starting point. As I began work, I found that they are very different scenes, and you can’t really analyze them the same way. Alien is a film that resonates with audiences because it taps into our ancient past and it’s a film that deals with mythology.

But there are so many great scenes and imagery. The moment where Kane (John Hurt) is being lowered into the egg chamber is spectacular–that Giger tableau is so Lovecraftian. Then there’s the scene where they discover the Space Jockey. To me, it’s the purest expression of Lovecraft on film but in a different way than we saw with Carpenter’s The Thing a few years later.

How do you storyboard the documentary, and how long did it take to amass all the sketches and pages from the original screenplay? You also shot footage of interviewees so they are partly in shadows–it’s like they are on the Nostromo. What went into that?

Well, that’s all in the script. I’m one of the few documentarian filmmakers who writes a full screenplay before we go to edit. I start with a very clear structure in mind and, obviously, you have to start filming before you have a script. But there’s a point where we have enough material that I–using the transcripts that we have, the materials, and the visuals–write a full screenplay and it has to work on the page before it works on the screen.

Once I have a version of the script that I feel is working in my head, I hand it over to my editor to start assembling shots according to the script. Then we start having a discussion about what works and what doesn’t. At that point, I start listening to him about what he has to say, and what he wants to bring to the picture. But to me, it always starts with the script.

The deeper you get into the doc, the more opinions surface. Long ago, I learned that Aliens was made as an allegory to the Vietnam War. In Memory, Clarke Wolf describes Alien as having “patriarchal guilt.” Are there theories or opinions that were new to you, or surprised you during this process?

I’ve heard a lot of theories. Oddball or not, and whether I believe them or now, what I have to do is ask if they fit the story I’m telling. The end goal of Memory is very, very specific. This idea of Alien as the expression of an unconscious patriarchal guilt is exactly in line with what I believe the film is and what I think it represents. It’s very much in line with Greek mythology and the Furies (female chthonic deities of vengeance), and that was part of what I was trying to express.

There are several interviews we had done which were really interesting, but they didn’t fit within the context of what I was trying to say about Alien. Some of them were actively cut, and it was unfortunate. It’s not that they weren’t insightful or valid, they just didn’t fit in the narrative I needed to express.

What is your first memory of being in the theater?

My first memory of being in the theater was probably The Empire Strikes Back. I do have some fuzzy memories… but actually, now that I think of it, my very first memory was not of a specific movie but of a Looney Tunes cartoon that played in front of it. Basically, I got started watching movies very, very young and I never stopped. [Laughs]

Okay, now what was the first R-rated movie you saw or snuck into a theater to see?

Oh, I was watching horror films very young. I remember watching Night of the Living Dead, and Scanners, and Cannibal Holocaust all when I was super young.

Well, you got me beat. I was watching Aliens, The Thing, and Total Recall around the age of 9.

Ridley Scott was described in your documentary as “the greatest visual stylist since Kubrick’s prime.” What are your thoughts on that?

He’s certainly one of them, but for me, the greatest contemporary visual stylist is David Lynch. It certainly didn’t hurt Alien to have that level of creative skill on set, and Ridley is one of the greats. At that same time, however, David Lynch was just starting his career. Eraserhead was made just two years prior in 1977. They are very different filmmakers, obviously, but that statement which was made in the film was a very powerful one and they had every right to say it.

Memory: The Origins of Alien is now available digitally and in theaters.