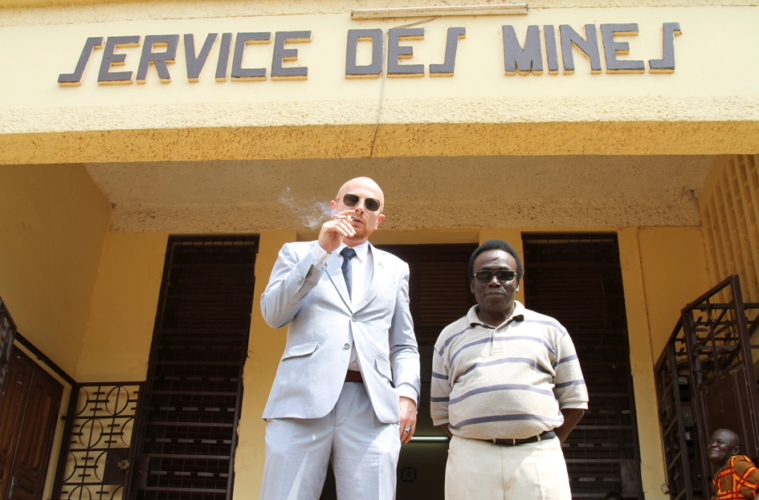 Director Mads Brügger told us late last year – soon after his film was accepted into Sundance – that The Ambassador was “NOT a mockumentary,” rather entirely truthful, aside from a lead performance from himself. One might picture a Borat-esque dark comedy (we even assumed as much when the first trailer hit), but with the film having premiered, it has been revealed to be a much more bold venture.

The Lars von Trier-produced documentary sees Brügger as a European businessman who actually gets entangled in dangerous Central African Republic commerce and politics, and forms a genre of  “performative journalism.” Drafthouse Films – who is set to release Zentropa’s other dark comedy, the hilarious Klown – picked this one up as well. One can check out the trailer, which goes for a more serious feel than the last look, and poster below from Apple – and no, it has nothing to do with the next project from the filmmakers behind Safety Not Guaranteed.

This darkly comic, genre-bending piece of journalism from international provocateur Mads Brugger rips the corroded lid off the global scheme of political corruption and exploitation happening in one of the most dangerous places on the planet: the Central African Republic. Armed with a phalanx of hidden cameras, black-marked diplomatic credentials and a bleeding-edge wit, Bruegger transforms himself into an outlandish caricature of a European-African Consul. As he immerses himself in the life-threatening underworld of nefarious bureaucrats, Bruegger encounters blood diamond smuggling, bribery, and even murder–while somehow managing to crack amazing razor-sharp barbs at every steps along the way. From each absurdly terrifying/hilarious situation to the next, The Ambassador is a one-of-a-kind excursion from the man whom The Huffington Post called “the most provocative filmmaker in the world.” The Ambassador hits VOD on August 3rd, before arriving in theaters on August 29th.