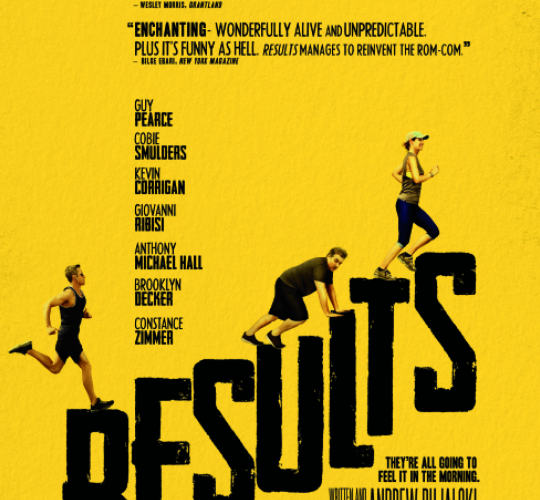 After crafting a number of acclaimed small-scale dramas, Andrew Bujalski certainly didn’t leave his style behind for his latest feature, Results, but it does mark a new arena for the director. Featuring the high-profile cast of Guy Pearce, Cobie Smulders, Kevin Corrigan, Giovanni Ribisi, Brooklyn Decker, Constance Zimmer, and Anthony Michael Hall, the comedy premiered at Sundance earlier this year and now we have the first trailer ahead of a May release.

We said in our review, “Certain movies coast by on the charm of their cast, and that’s pretty much the case with writer-director Andrew Bujalski‘s Results. That’s not to say the film completely rests on the shoulders of the talent assembled, but if there’s one major reason why the film ultimately succeeds, it’s because of this pack of reliable actors turning in entertaining performances.” Check out the trailer below along with a pair of posters.

Recently divorced, newly rich, and utterly miserable, Danny (Kevin Corrigan) would seem to be the perfect test subject for a definitive look at the relationship between money and happiness. Danny’s well-funded ennui is interrupted by a momentous trip to the local gym, where he meets self-styled guru/owner Trevor (Guy Pearce) and irresistibly acerbic trainer Kat (Cobie Smulders). Soon, their three lives are inextricably knotted, both professionally and personally. Results opens in theaters and on VOD on May 29th.