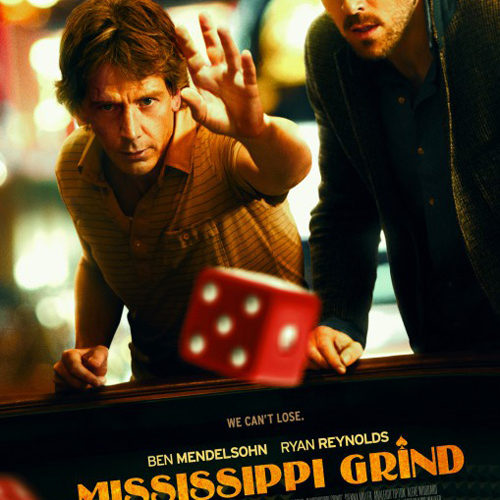 After breaking out with the bleak, but masterful character study Half Nelson, filmmaking duo Anna Boden and Ryan Fleck took on baseball with the under-appreciated Sugar and mental illness with It’s Kind of a Funny Story. Returning after five years, they are back with some freewheelin’ fun in Mississippi Grind, a good-natured but ultimately conventional exploration of the sadness and loneliness that comes with a gambling addiction.

Ryan Reynolds, returning to Sundance after his career-best performance in The Voices, further proves his dramatic capabilities playing Curtis, a drifter who finds more pleasure in the journey than the destination of gambling, as his repeated mantra tells us. Ben Mendelsohn, often portraying unpredictability and pent-up aggression in his wealth of gripping supporting characters, finally gets a leading role as the deeply compelling Gerry, a loner with an underlying sorrow who’ll bet on anything — even the appearance of patrons exiting a bathroom. Their paths inevitably cross and after Gerry convinces Curtis he’s his lucky charm, they hatch a plan to travel down the path of the Mississippi River, hitting up gambling establishments on the way to attain $25,000: the buy-in amount for a major poker game in New Orleans. As they encounter past lovers, self-inflicted harm, and the highs and lows of their hazardous obsession, the kindred spirits of Reynolds and Mendelsohn’s characters reveal superb chemistry, even if the meandering story around them lacks momentum.

Early on stopping in St. Louis, Curtis’ intermittent relationship with Simone (Sienna Miller), whose job it is to please the men of the local riverboat casino, is revealed — one of the only genuine things we learn about the man. While Curtis’ desire to have a future with her feels half-baked, a more revealing connection is had with Simone’s co-worker and friend Vanessa (Analeigh Tipton), with whom Gerry finally opens up to. We learn about his estranged daughter and ex-wife, a deeply fractured relationship that will be revisited to destructive results.

Whereas the recent remake of The Gambler dealt with similar themes with more formal intrigue, Boden and Fleck invoke a 70’s vibe and the basic plot of Robert Altman’s California Split with lesser results. As the duo make their way through various casinos, racetracks, bars, and riverboats, its a rinse-and-repeat formula that soon becomes stale, but thankfully the two actors at the forefront will keep one intrigued. Like any worthwhile gambling drama, Grind shows us the gloomy dependence on pure chance that will never fully satisfy.

As the two progress to their eventual goal — which has an intriguing twist featuring James Toback  (clearly a winking nod), but results in character turns that don’t feel entirely founded — the finale soon becomes laborious with one too many endings. Ultimately, Mississippi Grind provides a venerable acting showcase to a pair of under-appreciated actors, but could have used more impetus in its execution.