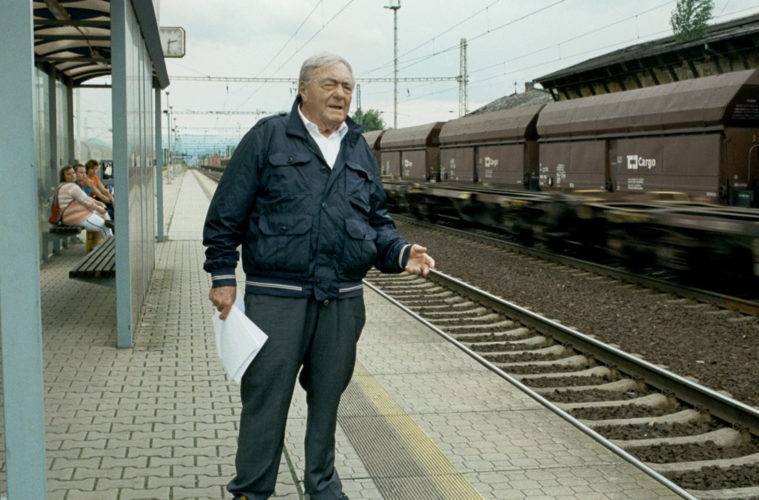 Never would we expect the trailer for a festival-running Holocaust documentary to premiere on a trade website, but part of me (the more optimistic side, I suppose) would like to think it points toward the enduring legacy of Claude Lanzmann, and more specifically that which belongs to his 1985 opus, Shoah. Now, The Last of the Unjust — his latest examination of history’s greatest atrocity and, itself, an expansion of the aforementioned title, utilizing footage originally recorded for that earlier project — has been garnering acclaim since its Cannes debut (Kent Jones, as per usual, provides the best assessment I’ve yet read), and, with distribution from Cohen Media Group now set to bring the picture in 2014 (even sooner for those in New York), THR have exclusively premiered a trailer.

Because, yes, even films about the worst of humanity have to be sold, though it’d be nice if this, in particular, could’ve been introduced with a little more delicacy — with its soaring music and husky voiceover, at least, there’s a bit too much forcefulness in the way it’s sold. Enticing as the prospect of Unjust may sound to some, is this what gets more people to think a documentary will be “powerful” (the reputation of its subject matter or creator notwithstanding) and, by that token, worth both their time and money? If as much is the case, so be it: better that they play those angles and benefit from the procedure.

A few clips can be seen, too: “1975. In Rome, Claude Lanzmann filmed a series of interviews with Benjamin Murmelstein, the last President of the Jewish Council in the Theresienstadt ghetto in Czechoslovakia, the only “Elder of the Jews” not to have been killed during the war. A rabbi in Vienna, following the annexation of Austria by Germany in 1938, Murmelstein fought bitterly with Adolf Eichmann, week after week for seven years, managing to help around 121,000 Jews leave the country, and preventing the liquidation of the ghetto.

2012. Claude Lanzmann, at 87 – without masking anything of the passage of time on men, but showing the incredible permanence of the locations involved –exhumes these interviews shot in Rome, returning to Theresienstadt, the town “given to the Jews by Hitler”, a so-called model ghetto, but a ghetto of deceit chosen by Adolf Eichmann to dupe the world. We discover the extraordinary personality of Benjamin Murmelstein: a man blessed with a dazzling intelligence and a true courage, which, along with an unrivaled memory, makes him a wonderfully wry, sardonic and authentic storyteller.

Through these three periods, from Nisko in Poland to Theresienstadt, and from Vienna to Rome, the film provides an unprecedented insight into the genesis of the Final Solution. It reveals the true face of Eichmann, and exposes without artifice the savage contradictions of the Jewish Councils.”

The Last of the Unjust will hold a one-week engagement at Lincoln Plaza Cinema on December 13, while a more general release is expected to go into effect next year.

Do you hope to see another title from Lanzmann, and would this seem to fit expectations?