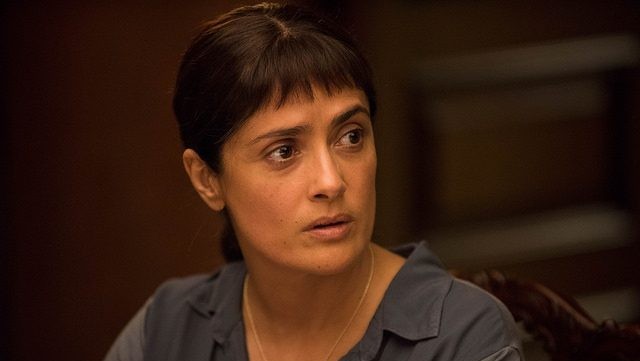 If you could sit face-to-face with Donald Trump, what would you say? Beatriz at Dinner doesn’t imagine exactly that, but the scenario it presents is undeniably analogous. Miguel Arteta‘s latest film, scripted by Mike White during last year’s election cycle, follows Beatriz (Salma Hayek), an immigrant who unexpectedly attends the dinner party of one of her wealthy clients, where she comes face-to-face with an egotistical real estate mogul, played by John Lithgow.

I said in my review from Sundance this year, “Presenting a clash of socio-economic classes and the ensuing discourse of morals and politics, the latest dramedy from Miguel Arteta is an observant, but not entirely successful outcry for the agency of the under-represented.” Also starring Chloë Sevigny, Connie Britton, David Warshofsky, Amy Landecker, Jay Duplass, and John Early, check out the first trailer below.

Beatriz (Salma Hayek), an immigrant from a poor town in Mexico, has drawn on her innate kindness to build a career as a health practitioner in Los Angeles. Doug Strutt (John Lithgow) is a cutthroat, self-satisfied billionaire. When these two opposites meet at a dinner party, their worlds collide and neither will ever be the same.

Beatriz at Dinner opens on June 9.