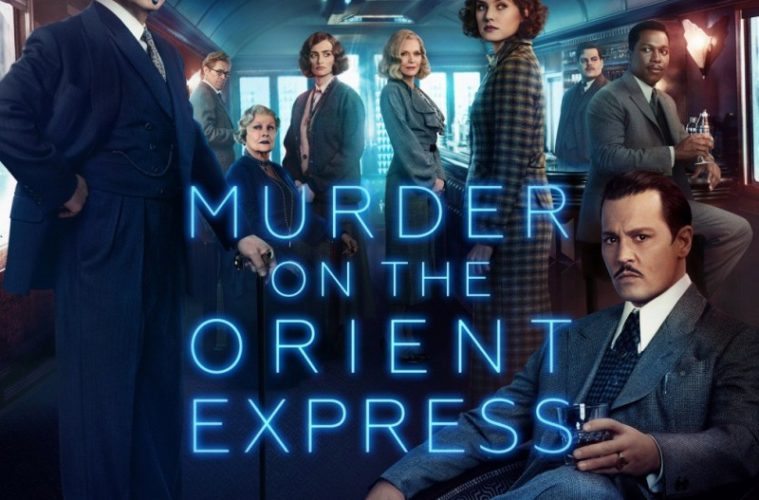 Review: ‘Murder on the Orient Express’ is a Polite Adaptation That Steers Off-Course

Sherlock Holmes was successfully given the cinematic and television treatment this last century, both of which been met with hardcore followings and a renewed appetite for the old-school whodunit. Benedict Cumberbatch and Robert Downey Jr.’s Sherlocks were both oddly different interpretations of the famous detective, but the fresh and personal touch both actors brought to the characters made them likably inventive.

However, Agatha Christie’s Belgian detective, Hercule Poirot, equally legendary to Holmes–at least in my book–has not been given the same treatment in recent popular culture. So, it was with great anticipation that Kenneth Branagh has adapted what might just be Christie’s most famous novel, “Murder on the Orient Express.” The cast assembled for this cinematic affair is justifiably impressive, with Branagh himself playing the crucial role of Poirot as he interrogates his way through a steaming train, looking for a murderer.

Branagh, a thespian well-known for capturing Shakespeare adaptations on-screen (Henry V, Much Ado About Nothing, Hamlet) is a wise choice to tackle Christie’s Poirot, especially given his knowledgeable background in both literature and stage. However, the results are mixed at best, encompassing both what is great about Branagh as a director, but also his weaknesses. A highlight comes at the start with a setpiece at Jerusalem’s wailing wall. Shot like the introduction to a James Bond movie, this is meant to build-up Poirot’s insatiable personality. The way he deftly solves the case, with walking stick at hand, proves that he is the kind of detective that is always several chess pieces ahead of his competitors. Branagh as Poirot is an inspired choice—complete with a wondrous, legendary moustache—and the British actor captures the spirit and majesty of Christie’s famous murder-solving detective in ways that belong in a better vehicle.

The year is 1934 and Poirot is quickly sent on the Orient Express back to London. A murder has just happened and he must solve it. The passengers (i.e. suspects) on the train are a who’s who of Hollywood actors, each with their own part to play in the surroundings. Unfortunately, given a runtime of just two hours, the film is overstuffed with characters that aren’t developed enough to achieve much emotional investment. Perhaps a mini-series would have done the book more justice. Even worse, the character of Pilar Estravados (Penelope Cruz) was never in the novel—rather appearing in “Hercule Poirot’s Christmas”—which is then not so surprising that she ends up being the weakest link of ensemble.

Johnny Depp, having the time of his life, stands out as the sketchy and sleazy Ratchett, a supposed art dealer that might have connections to the mob. He brings along Masterman (Derek Jacobi) and his personal secretary, Hector MacQueen (Josh Gad), for the ride. Ratchett teases Michelle Pfeiffer’s Mrs. Hubbard, an American widow looking for another husband. Daisy Ridley (far from her Force Awakens heroics) is Mary Debenham, a governess that should perhaps not be trusted, who starts to curiously converse with Dr. Arbuthnot (Leslie Odom, Jr. of Hamilton). Next door to them is a creepy German, as played by Willem Dafoe, an academic that also seems to have sinister secrets of his own.

These characters are featured most heavily in the film’s middle section, which turns to Poirot interrogating them. It’s the strongest piece of this murder puzzle as we witness sharp dialogue and a chance for the actors to cheeringly use their talents. This is polished, by-the-books Hollywood filmmaking, digging deep into the classical acting and directing of old-school studio whodunits. Despite having an ensemble that’s a joy to behold, one wishes Branagh could have found a way for these thinly-sketched characters to interact more.

While Branagh and the cast at his disposal keep the proceedings engaging and spontaneous as they could be for the first hour, the second hour is a different story as a multitude of heavy-handed reveals within a messy structure consistently threaten to derail the initial pleasures. Unlike the BBC’s Sherlock, Branagh’s classical style begins to dull; even the finding of an important clue feels unexciting. At no point are we ever intrigued as to who the killer is which is an issue for a two-hour murder mystery. Suffice to say, this all leads to muddled structural decisions and an underwhelming finale which has us playing catch-up to Poirot instead of discovering the reveals alongside him.

When it comes to a murder-mystery, one would expect tense atmosphere with a hint of dreadful paranoia lurking in every frame. Branagh misses this tension with a too-polite approach, over-stuffed with camaraderie and strenuous likability. The claustrophobia of the source material is gone, replaced with Branagh’s interest in shots that depict, for example, the majesty of the snow post-avalanche, instead of Christie’s descriptions of the harsh conditions entrapping the characters on the train. Branagh—the actor—dominates the film, with everyone else in supporting roles. Meanwhile Branagh—the director—relies on a too-colorful style and atmosphere, shooting himself in the foot by cutting short the darkness that loomed in Christie’s original vision.

Murder on the Orient Express is now in wide release.