Jolt Review: Kate Beckinsale Has Plenty of Fun in a Reverse Crank 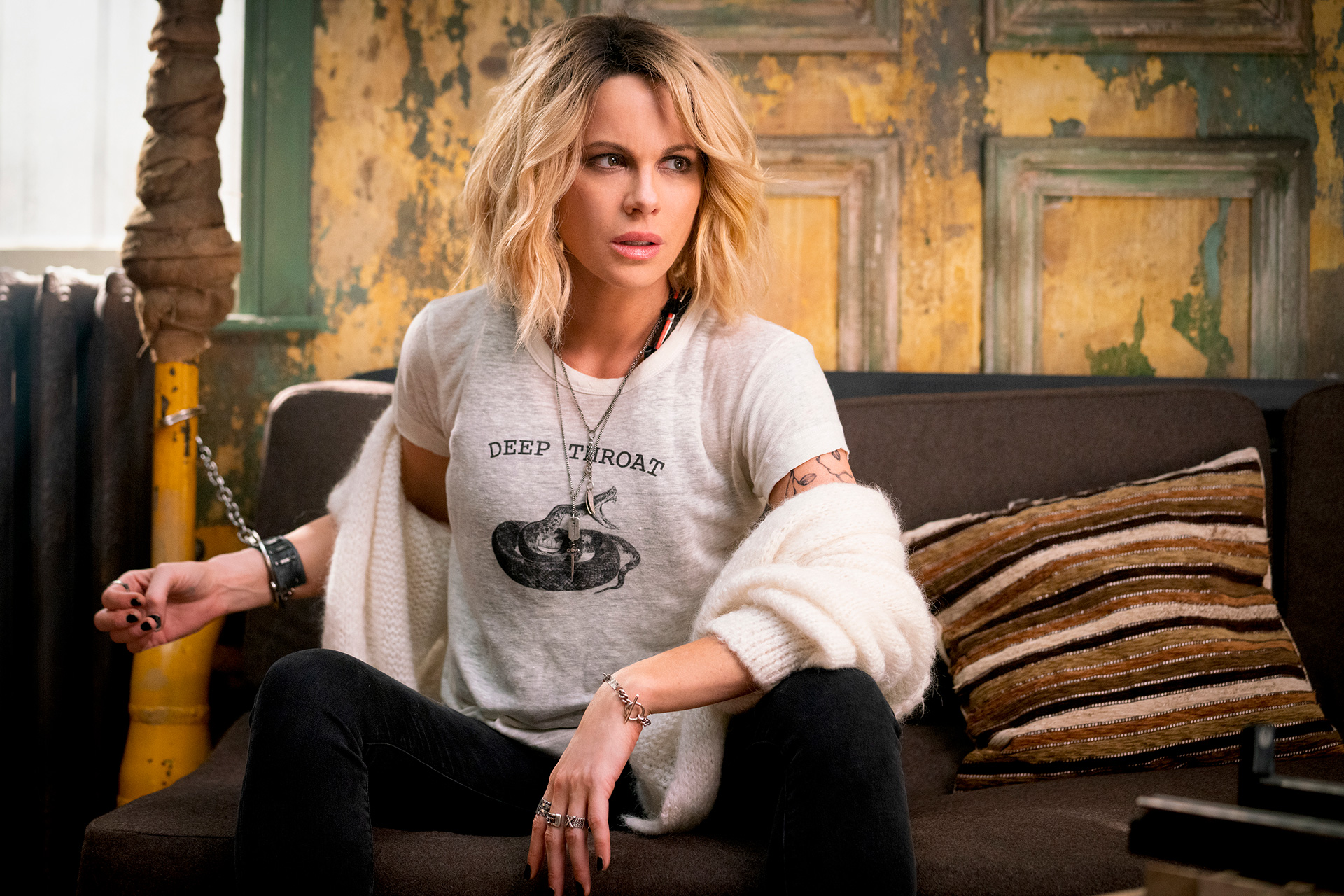 Is it her extremely high cortisol level that makes young Lindy a rage monster ready to slam a kid’s face into a piece of cake after he jumps his turn? Or did a rage-fueled adolescence under the rocky guardianship of a drug-addled mother and alcoholic father make it so said cortisol became extremely high? I don’t think screenwriter Scott Wascha cares which is which as long as his fast-paced, Susan Sarandon-narrated prologue montage can let us know an adult Lindy (Kate Beckinsale) is too uncontrollable for even the military to utilize her laundry list of skills. She’s tried as many physically punishing and brutally violent activities as possible to curb her aggression. Turns out only one thing consistently works: self-administered electrical shocks.

Director Tanya Wexler’s aptly named Jolt picks up right when this new therapy arrives. Lindy’s psychiatrist (Stanley Tucci’s Dr. Munchin) knows that continually zapping herself—more seconds in the day bring an event that triggers her wrath than not—isn’t a viable solution, but he hopes it can calm her nerves long enough to make some human connection that’s real enough to give the balance necessary to let go of the remote button. His assignment is to go on a date; Lindy begrudgingly complies. Between a hostile customer berating a helpless valet and a rude waitress willing to kill allergic diners to adhere to the restaurant’s “no substitution” policy, however, things don’t go so well. Although Justin the accountant (Jai Courtney) seems quite nice.

Cue the misogynistic philosophy that all Lindy needed was a good “lay” to unwind, and a manic period of euphoria has her wondering if said joke were true. Add an untimely murder, a trip to the police station with the entertaining comedy duo of compassionate (Bobby Cannavale’s Vicars) and by-the-books (Laverne Cox’s Nevin) cops, and a lead taking Lindy into a world of arms dealers (Steven Osborne) and billionaire entrepreneurs the CIA won’t even touch (David Bradley’s Gareth Fizel) and the whole becomes a reverse Crank. Rather than need the adrenaline spike of insane violence, sex, and electricity, Lindy holds tight to the fact that she needs her electrode vest to mitigate collateral damage. She relishes beating up baddies and shocks herself before hurting allies.

That’s the galaxy-brain insight, anyway. Lindy harming herself above innocents (mean-spirited people who don’t deserve the full brunt of her pain) means she’s a good person. Maybe that’s why no one has broken through until Munchin. They all wanted to use her. He wants to save her by helping her realize that the desire to protect (herself and / or the victims of those she can’t wait to kick in the groin) is what ultimately drives her. This whole escapade for revenge only proves that truth more—Lindy’s violence is in pursuit of righting a so-called wrong while Vicars and Nevin have their hands tied by protocol. It’s why she’d rather seek her vengeance with the vest on despite knowing things would go more efficiently with it off.

Besides a brawl pitting Lindy against three dudes in an underground fighting ring, her sparring is more verbal in nature—the odd punch / kick for punctuation. Our enjoyment of her quest for blood thus hinges more upon how fun we consider the humor Wascha and Wexler provide than the action itself. That entails spending more time with Vicars and Nevin than you might expect (Cannavale and Cox’s rapport with each other and their rapport with Lindy respectively are probably the best parts of the film), laughing at Tucci’s sarcastic retorts (a prerequisite being that he needs a gun just to make sure Lindy doesn’t kill him upon saying something she doesn’t like), and smirking through Delacroix’s (Ori Pfeffer as Fizel’s head of security) smug belief he’s untouchable.

The rest lies with Beckinsale and how much fun she’s having. I’d say plenty from both her performance and the fact that, like so many of these straight-to-streaming actioners, Amazon has their fingers crossed for a franchise. A lot of the comedy focuses on penises—a welcome contrast to the usual objectification of women this ilk is known to harbor—and some jokes feel dated (a “Geek Squad” scene stolen by Sophie Sanderson’s Andy feels very mid-aughts Chuck), but I won’t lie and say I didn’t laugh more than once. If anything, it’s the dramatic beats that weigh things down with a desire to ensure we don’t see Lindy the same way everyone else does. She deserves more than being violence incarnate.

While a commendable goal, however, it does throw a wrench into the hyper-kinetic fisticuffs. Right when we think all hell is about to break loose, Lindy gets cracked in the back of the head to slow down and consider her next move. And right when it appears she’s going to take a breath and enlist help from those offering it, she puts the peddle to the floor and dives into a battle sans safety net. I almost wonder if a sequel will be the best thing for Jolt in the long run, when it won’t have to rely on so much exposition—its opening ten minutes or so are tedious despite their rapid-fire construction—even if a stage for conspiracies and secrets is also being set.

That’s the unfortunate truth about properties biting off more than they can chew. Whereas John Wick and The Purge existed as self-contained entities that possessed the mythology necessary to expand, Wascha has written Lindy’s life in a way that’s trying to buy more time than it already has. So instead of spending all his effort on making this movie the best it can be, he’s planning five steps into the future without knowing if he’ll get there. Too many have tried and failed to do the same thing, leaving behind an opening chapter that mostly works and a ton of wasted potential that never will. This one is no different. Maybe the maneuver will pay off. Or maybe Jolt will forever be a marginally entertaining missed opportunity.