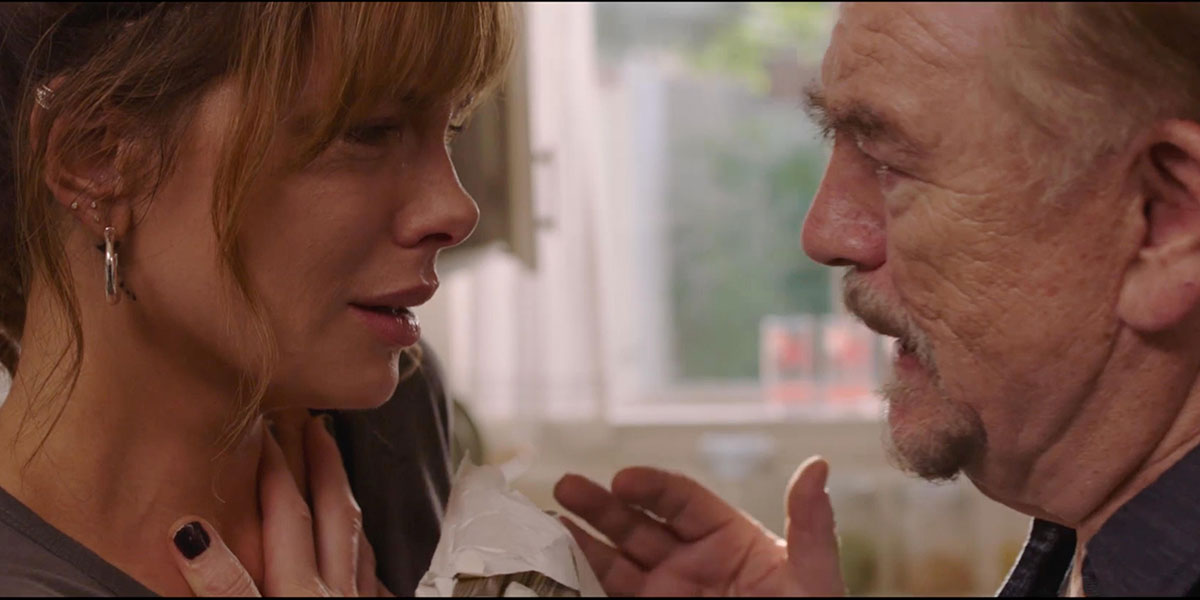 Maxine (Kate Beckinsale) isn’t having a good day. She’s barely slept after working the nightshift cleaning the place where she used to pole dance and hopes to earn enough tips at her waitressing day job to pay for her son Ezra’s (Christopher Convery) epilepsy medication when her ex (his father) Tyler (Tyson Ritter) causes a scene that ultimately gets her fired. Then the school calls to say the boys who assaulted her son were suspended as though it would soften the blow that he’s being punished with detention for getting beat up (I see protocols haven’t changed in over two decades). And to top everything off, she also gets a phone call from her father (Brian Cox’s Max). From jail. After twelve years. Asking to live with her.

Welcome to director Catherine Hardwicke and screenwriter Mark Bacci’s Prisoner’s Daughter, a film that seeks to showcase the power of reconciliation. It’s not an easily won endeavor considering Maxine wants nothing to do with her father after all this time. Not after everything she endured while he beat people up for money when not behind bars. She watched her mother drink herself to death, got into a relationship with a drug addict she can’t trust to be in the same room as their son despite the boy idolizing him, and owes so much money that Ezra must only take half a pill each morning to stretch the few doses he has left. If Max didn’t have money to pay rent, she never would have spoken to him again.

That’s why he’s allowed in the door. He’s not to tell Ezra they’re related by blood. He’s not to mention that he was in jail. And bringing up the fact he’s dying—with four months left due to pancreatic cancer, the warden granted Max this opportunity because of the work he did to help get so many fellow inmates clean from addiction—isn’t a topic for discussion. Maxine thinking any of this can actually be kept under wraps is the kind of delusion desperate people create to fool themselves into thinking a bad decision can be good depending on its much-needed payoff. The man has an ankle bracelet, after all. He can’t leave the house. It’s therefore not a matter of if, but when the ruse will evaporate.

So, Max can finally try proving he’s no longer the man he was. That doesn’t mean asking for or demanding forgiveness, though. He’s found a point of clarity to understand that he deserves nothing. He’ll take what he can get and hopes to perhaps do enough good in the little time that’s left to begin to redeem the image of himself that he has in his own mind—an image he can never truly see the full scope of considering, as his old friend Hank (Ernie Hudson) says, “You didn’t leave anyone around to explain just how bad you were.” That means fulfilling a promise he made to his wife. Providing whatever support is possible to his daughter. And teaching his grandson how to better protect himself.

To those means, Prisoner’s Daughter is effective. It’s written with more than enough manipulation to touch the strings, but still delivers an affecting drama that’s as much about Max reclaiming his humanity as Maxine genuinely letting him do so. All the usual tropes are present, though, from Ezra inevitably enacting revenge to Max realizing he can solve problems without murder—obvious yet relevant. Despite Maxine trying to teach her son violence isn’t the answer, however, a moratorium on killing isn’t a sudden shift towards pacifism. The overall messaging can’t help but get muddled in the second half as a result. All the really nice character stuff is thrown out for conventional histrionics to achieve what’s meant as an “ultimate redemption arc” despite proving rushed, over-the-top, and narratively reductive.

It’s as if Bacci started to realize he was writing a contemplative meditation on difficult familial dynamics needing a recognition of abuse before even thinking about floating the notion of reconciliation and got bored. So, he swings the sledgehammer down hard, shattering whatever nuance was present (admittedly not much) to let Hardwicke supply an almost comical denouement in its visual depiction of everything that the start seemed desperate to avoid. Growth no longer becomes about Max having changed his ways, but how he’s altered his perspective of those ways to suddenly render them meaningful rather than monstrous. And Maxine goes from not wanting to give her dad any benefit of the doubt to her literally unleashing his wrath on her abusers like his boss paid him to do.

And while that unfortunate pivot comes with a third of the runtime left, it must taint the rest since it’s the payoff. It’s the “happy” ending for this resonant yet excessive melodrama. Except, of course, that it undoes what was built—maybe not narratively, but definitely contextually. It’s heartwarming only if you look past the brutality—something Maxine’s trauma has been saying we shouldn’t ignore. So, which is it? You can’t have both. You can’t let Beckinsale and Cox do all that heavy lifting (I liked Convery, but his Ezra is precocious to the point of caricature) only to undermine them for a bow-tied conclusion ignited by a subplot’s escalation from zero-to-sixty out of nowhere. The filmmakers chose plot over character despite the latter faring so much better.