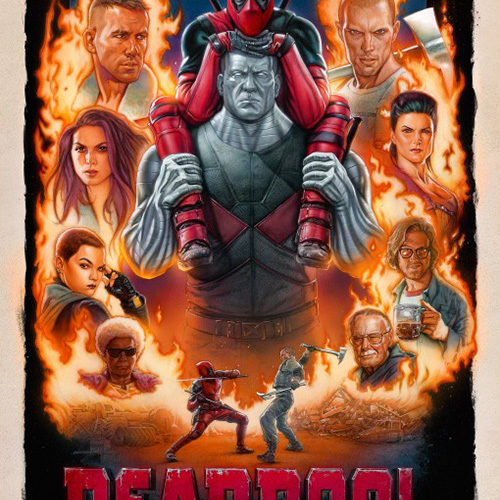 As Hollywood struggles to reinvent their array of superheroes with each iteration, it’s no surprise that audiences would become hungry for something off the beaten path. While it’s not the first post-modern comic-book adaptation, Deadpool is billed as ushering in a new direction: a fan-spurred, self-aware tentpole that’s R-rated to its core, featuring a wise-ass character (don’t call him a superhero) who’s fully cognizant of his outsider status in both the world he inhabits and Hollywood’s comic-book sandbox writ large. Despite the excess of fourth-wall-breaking continually reminding us of both, Tim Miller‘s directorial debut ultimately ends up feeling like another similarly structured, monotonous origin story, albeit with a more vulgar veneer.

Scripted by Paul Wernick and Rhett Reese (Zombieland), and based on Fabian Nicieza and Rob Liefeld‘s original comic series, Deadpool stars Ryan Reynolds as Wade Wilson, a former special ops soldier with a 40+ kill streak. He now spends his days as a small-time misanthropic mercenary, self-described as a “bad guy hunting down badder guys.” His only friend is the local barkeep, Weasel (T.J. Miller), who would usually be a film’s comic relief, if the lead wasn’t already. When Wilson meets Vanessa Carlysle (Morena Baccarin), an equally psychologically damaged prostitute, he finds love, expressed in one of the film’s few amusing jokes when we see their relationship evolve through holiday-themed copulation.

Our horrible existence is only interrupted by a few commercial breaks of happiness, he tells us before he’s struck by the news of widespread cancer consuming his body. When prompted by a mysterious individual, he decides to undergo an experiment that leaves him disfigured from head to toe, but with new healing powers. While maintaining a smart-aleck demeanor, he physically transforms into an anti-hero on a revenge mission targeting Francis (Ed Skrein), the man who inflicted his pain.

As a fan of dark comedies, and even ones in this very same genre (see: Kick-Ass), I’d be more than willing to buy in, but Deadpool is more concerned with the sheer amount of jokes rather than comedic timing or any semblance of cleverness. By gunning for the lowest common denominator at every turn, there’s rarely a quip that effectively lands. In its few moments of relief, the film pokes fun at its standing within the X-Men universe, particularly how little faith 20th Century Fox initially had in its prospects, budget-wise.

Rather than cleverly subverting the superhero origin structure we’ve seen repeated ad nauseam in the last decade, Deadpool opts for a comfortably dull framework. In giving our “hero” something to fight for, Baccarin and Reynolds almost sell the romance at the center, but abrupt tonal shifts in attempting to feign humanity come off as misguided. Upon learning his fatal diagnosis, Wade Wilson gives an introspective, heartfelt monologue about how much he’ll miss his true love, but it feels like a cloying grasp at compassion that the rest of this film holds no interest in. The Beauty and the Beast-esque emotional backbone — from the perspective of an asshole Beast — could’ve made for an interesting dynamic, but there’s little effort here to have the audience get initially invested in their relationship.

Jumping back and forth between two years prior when life was “normal” for Wade Wilson and the present-day as Deadpool is another touch that Miller could’ve expanded upon to make the stock origin story more bearable, but there’s little form utilized. Aside from a few slow-motion flourishes, most scenes are captured in bland medium shots with cinematography not out of place on Netflix’s Marvel shows. As Deadpool takes down nameless baddies on the hunt for Francis (aka Ajax) — another drab villain to plug into the eventual cut-and-paste showdown setpiece — other characters are thrown into the mix. X-Men underlings Colossus (Stefan Kapičić) and Negasonic Teenage Warhead (Brianna Hildebrand) show up as seemingly obligatory requirements to help expand the universe of Deadpool — namely to be the butt of a joke without ever having agency.

The ensemble is forgettable, but one wishes Ajax’s superhuman sidekick, Angel Dust, had more to do. She’s portrayed by Gina Carano, who brings a presence otherwise missing from the ensemble through a mostly dialogue-free role. (Perhaps it’s this very reason: giving a welcome break to the non-stop chatter.) This is an actress who has displayed her acute physical dexterity on screen in Haywire, and her talents are mostly wasted here.

For an 11-year-old sneaking into the theater for his first R-rated movie, Deadpool could prove to be a revelatory trip. For myself, it was an exhausting, grating experience, lacking in wit and cleverness as it crumbles underneath its wall-to-wall torrent of jokes. If this represents a new stage for comic-book adaptations, the future is even more dismal than one could have imagined.