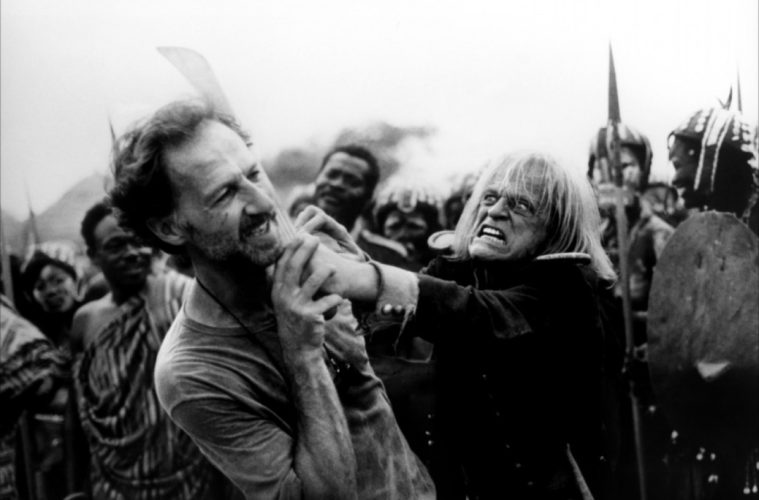 Keyframe Daily have a 1973 interview with Werner Herzog, conducted right before the world premiere of Aguirre, The Wrath of God… on television:

On January 16, 1973, Werner Herzog’s Aguirre, the Wrath of God had its world premiere—on television. It’s hard to believe, but Aguirre first appeared on the small screen and in black and white. With this interview, published in a West German newspaper with national circulation, the young journalist, political commentator and film historian Peter Schumann offered audiences a larger, more colorful vision of Herzog’s film, in hopes that they might be able to see it on the big screen too.

Stephanie Zacharek discusses the films of Dietrich and von Sternberg for the current BAM retrospective, at Village Voice:

In Marlene Dietrich’s ABC, the actress’s marvelous book of bon mots and observations for any and every occasion, under the heading “Josef von Sternberg” you’ll find just one simple line: “The man I wanted to please most.” Among women who think for themselves, or even just claim to, the idea of wanting to please a man is highly unfashionable. But what if Dietrich hadn’t? There would be no Amy Jolly in a white tuxedo, wooing French foreign legionnaire Gary Cooper with a posy in Morocco; no Shanghai Lily in Shanghai Express, counting — or losing count of — the number of men who helped her earn that nickname; no Agent X-27 in Dishonored, ever so glamorously clutching her black Persian cat as she readies herself for the journey to her next assignment, dressed in a dark leather pilot’s costume more fetching than any modern-day latex unitard could ever be.

Two early Peter Sellers films that have not been seen for almost 60 years are to get their first showing at a film festival, The Guardian reports.

The first image from Marie Amachoukeli, Claire Burger and Samuel Theis‘ Party Girl, which will open Un Certain Regard at the 2014 Cannes Film Festival. At The Dissolve, Noel Murray on the problem with predicting the future of cinema:

The problem with most panic-driven innovations in entertainment is that they become impositions of will, not responses to what the public wants. The way people use services like Twitter and YouTube, for example, is well beyond what the creators of those sites had anticipated, which means there’s something desperately unhip about media conglomerates belatedly jumping on those bandwagons, creating “official hashtags” and the like. I’m reminded of the mid-1990s music industry push to thwart piracy by making every CD into an “enhanced CD,” with largely useless bonus content that froze up your computer every time you popped in the disc. These are all cases of business people trying to muscle their way between the audience and the products they enjoy.

At The Week, Sam Fragoso has a solution for better film criticism, to stop rewarding trolls:

The response it received is a textbook example of an internet cycle in which unthinking negativity receives exponentially more attention than thoughtful discourse. It’s an environment in which a bomb-thrower like Armond White receives an abundance of attention when he trashes 12 Years a Slave, while dozens of more reserved takes get a tenth of the readership. This isn’t to say that critical dissent isn’t important to the conversation — writers like Calum Marsh have built careers on smart, incendiary takes that go against the grain — but focusing on the writers who don’t work with the same care and intelligence does everyone a disservice.

There is no such thing as purely nonfiction cinema. The corollary is, of course, that there is no such thing as purely fiction cinema either. Every film ever made has elements of both. The theoretical arguments here are a complicated bundle of ideas for another time, but the basic point is this: the line we have drawn between narrative and documentary doesn’t make very much sense.

At Criticwire, Sam Adams has a plea to kill the expert review:

You’ve seen it before, probably half a dozen times today: the Expert Review. Usually presented under a headline reading “What X Gets Wrong About Y,” it’s a most often a niggling fact-check disguised as a piece of criticism… I am not an expert in any of those things, although as a professional journalist and a graduate of a liberal arts college, I can pretend to be one with a couple hours’ notice. But I am an expert in cultural criticism, which in addition to giving me access to vast riches and a top-secret trove of state secrets, entitles me to say this to the legions of Expert Reviewers: You are Doing It Wrong.