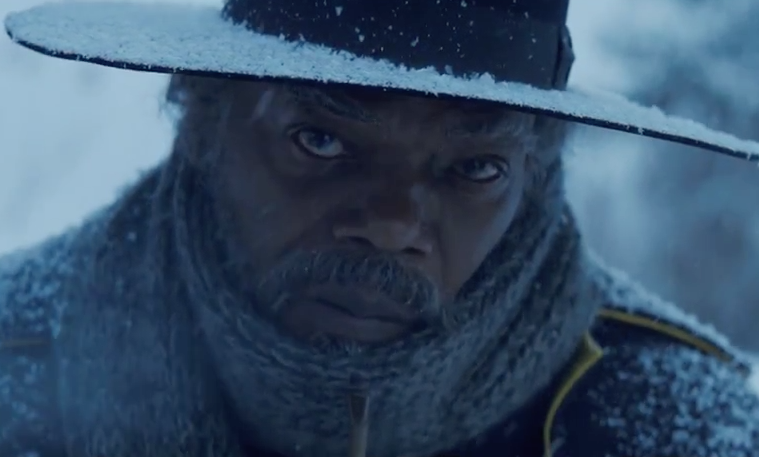 We’d imagine most filmmakers have exhibition in mind when they hand over their finished film to the distributor, but few have the leverage to be able to offer a presentation like Quentin Tarantino. Not unlike Paul Thomas Anderson‘s 70mm pop-up showings for The Master, The Hateful Eight will be getting a limited roadshow run in 70mm starting on December 25th.

Thanks to the first test screenings underway last month, we confirmed there will be an overture and intermission on at least this limited 70mm presentation, but now the director has chimed in offering up something even greater. “The roadshow version has an overture and an intermission, and it will be three hours, two minutes,” Tarantino tells Variety. “The multiplex version is about six minutes shorter, not counting the intermission time, which is about 12 minutes.”

Some may initially think this tinkering was ordered by Harvey Weinstein, but it was all Tarantino’s doing. “The 70 is the 70. You’ve paid the money. You’ve bought your ticket. So you’re there. I’ve got you,” he says. “But I actually changed the cutting slightly for a couple of the multiplex scenes because it’s not that. Now it’s on Showtime Extreme. You’re watching it on TV and you just kind of want to watch a movie on your couch. Or you’re at Hot Dog on a Stick and you just want to catch a movie.”

While he hasn’t revealed specific changes — nor would we want him to — he does say the 70mm version has “big, long, cool, unblinking takes,” adding that, “It was awesome in the bigness of 70, but sitting on your couch, maybe it’s not so awesome. So I cut it up a little bit. It’s a little less precious about itself.”

As we wait and see the list of the 100 theaters that will play the film in 70mm starting on Christmas Day, we know at least one filmmaker who will be there opening night: Christopher Nolan. For everyone else, the shorter, multiplex version — which by our calculation runs around two hours and 44 minutes, a minute shorter than Django Unchained — opens on January 8th.

What do you think of the release plans for The Hateful Eight?