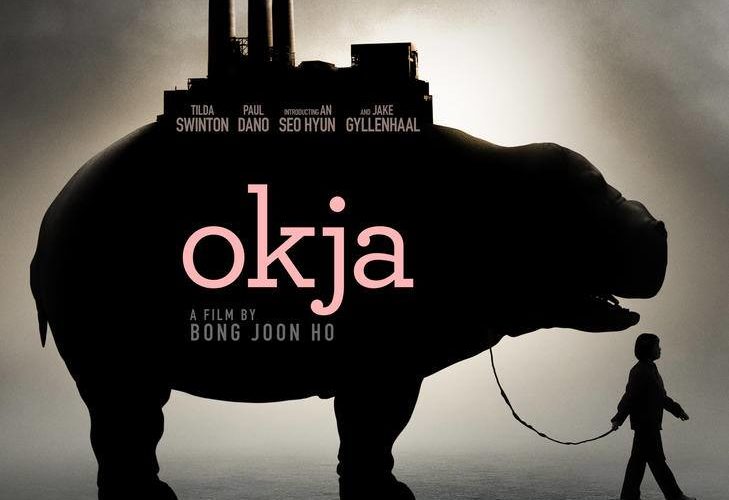 A dystopian story about a genetically engineered beast with overt anti-capitalist connotations, Bong Joon-ho’s Okja represents a synthesis and an upgrade – in scale as well as quality – of the director’s previous outings The Host and Snowpiercer, confirming him as one of the finest contemporary craftsmen of intelligent, ambitious blockbusters.

Okja is set in a parallel, not-very-different present, where the giant agrochemical corporation Mirando has covertly engineered a new breed of “super-pigs” — ostensibly to solve the world’s hunger problems, but really just to sell cheap meat and make a shit-ton of cash. GMO foods carry a stigma, however, so Mirando lie about the provenance of the super-pigs, claiming they were discovered on a Chilean farm. To divert the public’s attention, the company’s grotesque CEO, Lucy Mirando (Tilda Swinton), launches a massive promotional campaign in which farmers across the world will compete in raising the largest super-pig over a period of ten years.

The competition’s eventual winner is Heebong (Byun Hee-bong), who lives in the middle of the forest somewhere in Korea with his teenage granddaughter Mija (Ahn Seo-hyun) and their super-pig Okja. Elaborately rendered in convincing CGI, Okja looks like an oversized hippo with large, floppy ears, exudes the loving enthusiasm of a puppy, and is endowed with human-level intelligence and emotive faculties. In a first act that is strongly reminiscent of Miyazaki’s My Neighbor Totoro, Bong charmingly portrays the loving bond between Mija and Okja as they cavort about the forest, pick persimmons, of which Okja is particularly fond, and take naps in the shade with Mija cozily stretched out atop Okja’s massive stomach.

The idyll is brought to a tragic close when Mirando’s employees, led by the TV celebrity zoologist Dr. Johnny (Jake Gyllenhaal), come pick up the competition’s winning specimen and bring her back to New York. Thus starts Mija’s long adventure to rescue her best friend, which will lead her out of her paradisiac forest, through the bustling metropolises of Seoul and then New York, and finally in a nightmarish farm-cum-lab (somewhat injudiciously) designed to look like a concentration camp, where thousands of super-pigs have been bred and await slaughter.

Remarkably, Okja never succumbs under the weight of its plot, which grows surprisingly intricate for a blockbuster. The Animal Liberation Front, an eco-terrorist group fronted by Jay (Paul Dano), first deceive and later join forces with Mija, devising an elaborate plan to rescue Okjia and simultaneously expose Mirando’s nefarious practices. Meanwhile, Lucy Mirando’s twin sister Nancy (also played by Tilda Swinton) enters the picture, staging a power-grab. There is nary a dull moment for the entirety of the film’s two-hour running time and the action set-pieces are absolutely phenomenal, particularly an extended chase scene through the streets of Seoul involving two different trucks, a battalion of police cars, a detour through a crowded underground shopping mall, and a whole lot of exhilarating and rigorously orchestrated destruction along the way.

Impressive is also the range of emotions that the film elicits. Not only is Mija’s mission genuinely involving, but Bong and his co-writer, the author Jon Ronson, also get great comic mileage out of satirizing the Mirando corporation, rendering it a hilarious amalgamation of all of capitalism’s evils, as well as the A.L.F. and their oxymoronic credo of non-violent terrorism. As for the blatant anti-capitalist message: it’ll be up to the individual viewer to decide whether to take issue with the fact that it’s articulated in a film produced by Netflix and peppered with product placements for Apple. As straight-up entertainment, however, Okja is beyond reproach.

Okja premiered at the Cannes Film Festival and hits Netflix on June 28. See our coverage below.