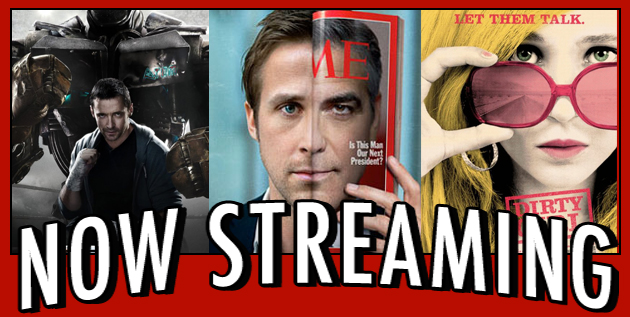 Each week within this column we strive to pair the latest in theatrical releases to the worthwhile titles currently available on Netflix Instant Watch. This week we look at alternatives to Real Steel, The Ides of March and Dirty Girl.

In theaters Friday, giant Rock ‘Em Sock ‘Em Robots will do box office battle with dirty pool-playing politicians and a road-tripping dirty girl. But if you want to take tales of sci-fi adventure, political intrigue and comedic coming-of-age home, then check our latest list of recommended movies available online.

In a world where robots box for our amusement, a struggling fight promoter (Hugh Jackman) works to get his career and his relationship with his estranged son on track. Do you like your family-friendly father-son tales with a dollop of sci-fi thrills?

Tron: Legacy  (2010) This visually dazzling sci-fi sequel also centers on a long-lost father and son team. Here Sam Flynn (Garrett Hedlund) goes in search of his missing father (Jeff Bridges), falling into a wild world of his father’s own creation.

ReBoot (1994) Indulge in ’90s nostalgia with this delightfully dated, computer animated series set inside a PC. In the world of Mainframe, a young boy named Enzo finds a father figure in Bob, a guardian tasked to protect Mainframe’s residents from the vicious viruses Hexadecimal and Megabyte and their robots minions. Seasons 1 and 2 are now streaming!

Astro Boy: The Complete Series  (2003) In this reboot of the classic 1960s animated series, a caring scientist takes pity on Astro, a robot boy and abandoned experiment, and decides to educate him in the ways of the world, and urge him to use his incredible powers for good. All 50 episodes now streaming!

Ryan Gosling stars as a political strategist whose idealism is threatened in the face of backroom betrayals and the shocking secrets that come to light during his candidate’s bid for the presidency. This George Clooney-directed drama is based on the play Farragut North, which is said to be inspired by Howard Dean’s 2004 presidential primary campaign. The Men Who Stare at Goats (2009) Ides’ co-writer Grant Heslov directs the absurd but true tale of the U.S. Army’s attempt to engage in mental warfare by developing psychic abilities within their ranks. George Clooney stars as a dedicated and self-proclaimed “Jedi warrior” who believes he has the power to burst clouds. Ewan McGregor co-stars in this satirical romp as the journalist investigating the exploits of these warrior monks.

Street Fight (2005) This dynamic doc follows Newark, N.J.’s heated 2002 mayoral race, which pitted in the unscrupulous incumbent Sharpe James against determined underdog Cory Booker. Though filled with shocking scenes and disturbing revelations, what is most unsettling about this doc is what it says about the political game in modern-day America.

Hunger (2008) This dark drama from Steve McQueen focuses on the 1981 hunger strike led by IRA volunteer/poet Bobby Sands (Michael Fassbender in his breakthrough role) that aimed to draw notice to their political cause while demanding better living conditions within the prison. Though this marked McQueen’s directorial debut, Hunger scored prestigious accolades that include an Indie Spirit nomination for Best Foreign Film, and a BAFT nod for Best British film.

Juno Temple stars as a girl with a bad reputation, a gay best friend and a bag of flour named Joan (Jett, not Crawford) in this 80s-set coming-of-age comedy written and directed by Abe Sylvia. Milla Jovovich and Mary Steenburgen co-star. 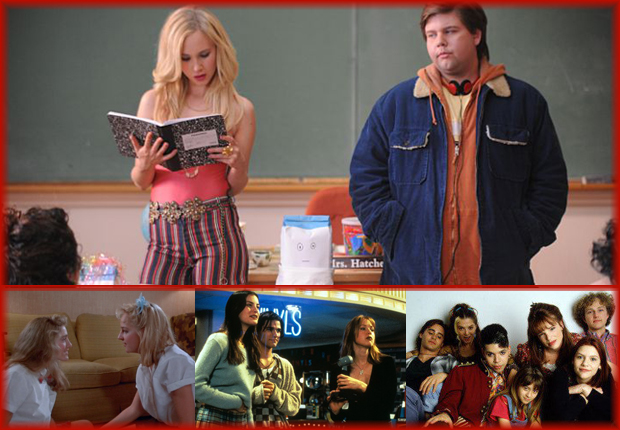 Want to revel in the highs and lows of teen girl life?

Girls Just Want to Have Fun (1985) Teen versions of Sarah Jessica Parker and Helen Hunt co-star in this authentic 1980s comedy about a pair of gal pals whose teen rebellion is sparked by a need to dance and well – have fun! Shannen Doherty co-stars. Conan O’Brien Can’t Stop (2011) Following the absolute catastrophe that was NBC’s handling of Conan O’Brien taking over The Tonight Show, O’Brien walked away from the company where he’d worked for decades, and was contractually barred from appearing on television or the internet for a period of 6 months. To his surprise, he became a beacon to the many Americans who felt similarly cheated by their bosses, and so arose Team Coco, the inspiration for Conan and company to take their tale on tour. Rodman Flender’s doc not only takes fans behind-the-scenes of Conan’s The Legally Prohibited from Being Funny on Television Tour, but also exposes Conan at an emotionally raw and harrowing time. Fearful of his next step and endlessly exhausted by the rigors of the tour, Conan unleashes on friends and staff with a barbed sense of humor that is often hilarious but at times unsettling. However, as an admitted fan and member of Team Coco, I found Conan’s openness to the cameras to be cathartic. In an industry manufactured by showy confidence and endless smiles, it’s fascinating and engaging to see an entertainer metaphorically wash away the make-up and reveal their deep-seated doubts. Remarkably, Conan O’Brien Can’t Stop is as hilarious as it is poignant, which may be why its one of my favorite docs of the year.