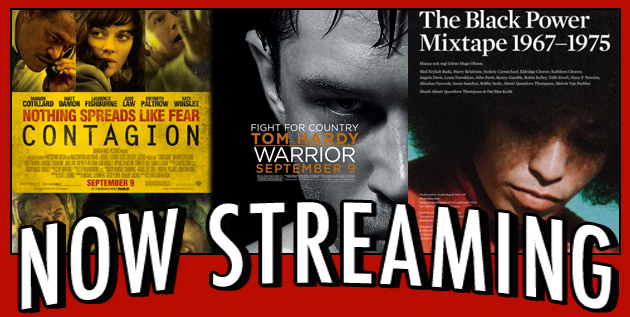 Each week within this column we strive to pair the latest in theatrical releases to the worthwhile titles currently available on Netflix Instant Watch. This week we focus on Contagion, Warrior and Black Power Mixtape 1967-1975.

This Friday in theaters is all about fighting. Whether it be fighting a world-rattling outbreak, fighting in the ring, or fighting the powers that be, movie protagonists will be engaging in the battles of their life for your viewing pleasure. And if you want to take the fight home, we’ve got a list of movies now available online full of stars, struggle and striking revelations. For more disaster flicks full of stars and scares, check out this trio:

Beyond the Poseidon Adventure (1979) This sequel is as star-studded as its source, boasting such talent as Shirley Jones, Shirley Knight, Slim Pickens, Telly Savalas, Peter Boyle, Sally Field and Michael Caine. As the luxury liner sinks, a pair of scrappy salvagers board the Poseidon and discover survivors…and intrigue!

The Towering Inferno  (1974) One of the many disaster features that mocks mankind’s hubris, The Towering Inferno centers on the creation and destruction of the world’s tallest building. Think Titanic as a luxury apartment building. Steve McQueen, Paul Newman, William Holden, Fred Astaire, Robery Wagner and O.J. Simpson star in this Oscar-winning thriller.

Tom Hardy stars as a mixed martial artist who returns home to ask his ex-boxer father (Nick Nolte) to train him for a crucial fight. But once on his long-neglected home turf, tensions mount with his older brother (Joel Edgerton). (Read Jack Giroux’s review here.) The Boxer  (1997) Daniel Day Lewis stars as Danny Flynn, an Irish boxer who has just completed a 14 year prison sentence for his involvement with the IRA. Now free, he aims to steer clear of his past associates to pursue boxing, but his burning attraction to his old flame (Emily Watson) draws him into dangerous terrain. Jim Sheridan directs.

Raging Bull  (1980) Martin Scorsese’s heralded boxing drama won Robert DeNiro an Oscar for his gritty and raw portrayal of Jake LaMotta, a boxer with a violent streak that may be his downfall. Joe Pesci and Cathy Moriarty, who both earned Oscar nods here, co-star. Soundtrack for a Revolution  (2009) This award-winning doc also speaks with musicians about the journey and impact of the Black Power movement. In fact, directors Bill Guttentag and Dan Sturman focus on the music of the revolution as a means to discuss it. Sountrack’s soundtrack features performances by Mary J. Blige, Wyclef Jean and John Legend.

Scandalize My Name  (1999) This doc features interviews with artists/activists Ossie Davis and Harry Belafonte and focuses on the effects of the Red Scare and its blacklist tactics on the Civil Rights Movement. Morgan Freeman serves as host.

Night Catches Us (2010) This Spirit Award-nominated drama is set in 1976 Philadelphia, and centers on a young girl inspired to understand her mother and deceased father’s past in the Black Panthers, after and old friend and former Panther returns to town. Anthony Mackie and Kerry Washington co-star. Lost in Austen  (2008) In this inventive re-imagination of Pride and Prejudice, Amanda is a modern girl whose life lacks the romance and civility she so prizes in her favorite Jane Austen novel. But when Elizabeth Bennet turns up in her tiny apartment, Amanda stumbles into the pages of Pride and Prejudice, swapping places with its iconic heroine. Now, masquerading as a visiting friend of Lizzie’s, Amanda finds herself surrounded by the love-seeking Bennet sisters and comes face-to-face with the difficult but dashing Mr. Darcy. But before long, her foibles begin to change the course of the classic tale, with Lydia running off with Mr. Bingley and Mr. Darcy falling for Amanda! Out of loyalty to the beloved novel, Amanda desperately strives to set things right.