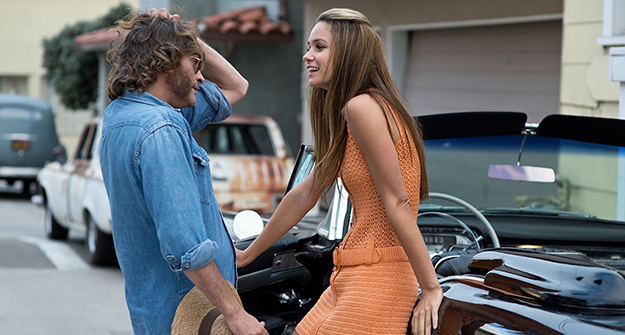 When it comes to the music of Inherent Vice, both the songs Paul Thomas Anderson used for his adaptation and over 100 tracks referenced in Thomas Pynchon‘s novel are currently available to listen to, but now we’ve learned the details on Jonny Greenwood‘s contributions.

Set for a release on December 15th, the official soundtrack includes 9 new tracks from the composer, along with a recorded version of Radiohead‘s “Spooks.” Also featuring Can, Neil Young, Chuck Jackson, and more, check out the soundtrack details below (via Film Music Reporter) and cover art, along with a fantastic new banner and still, featuring Joaquin Phoenix and Katherine Waterston.

Update: Watch a new teaser cut by Anderson and released for a special U.K. screening this week. Inherent Vice opens on December 12th and the soundtrack, which is now available to pre-order will be released three days later.