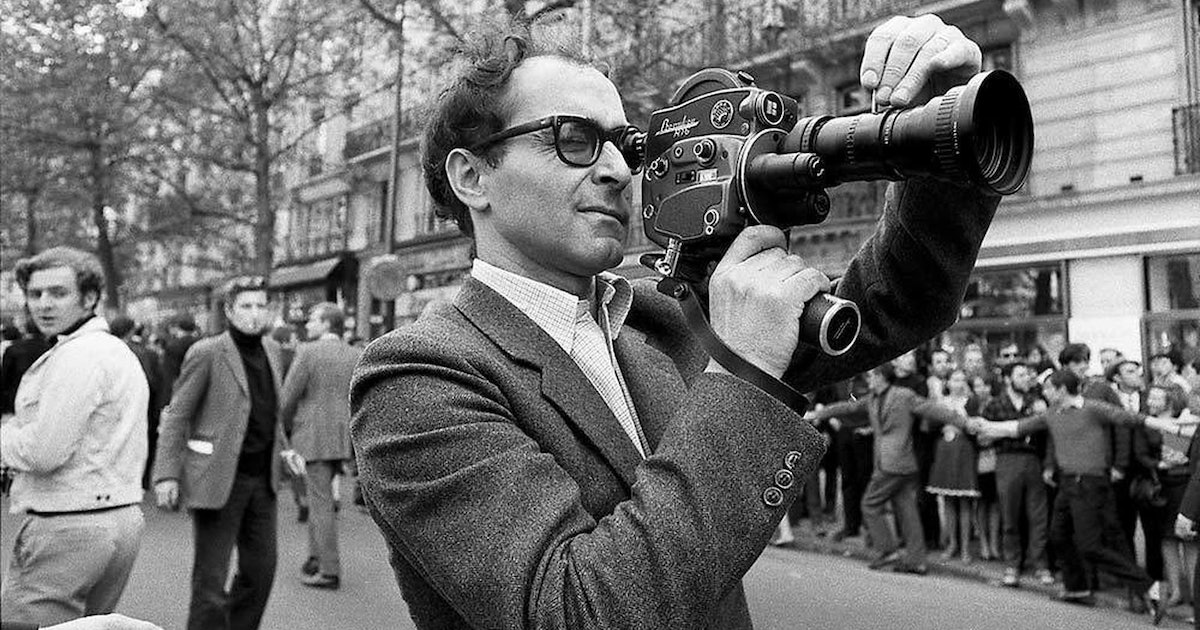 If the reverberations of Jean-Luc Godard’s life should ring well after we’re all gone, his passing could be nothing but seismic. As we revisit favorites, discover masterpieces, and discuss and debate in equal measure, filmmakers are taking time to pay Godard tribute—today feeling like the first step of what might become a new, postmortem chapter in cinema.

As is customary in such times, various filmmakers spoke to The Guardian about Godard. Rather than lift their entire feature, we’ll share some favorites and leave the rest—including Luca Guadagnino, Kelly Reichardt, and Mike Leigh—to the link. We’ve also added comments Leos Carax gave to Libération, dutifully translated by @pontdevarsovia.

From Breathless on, Godard redefined the very idea of what a movie was and where it could go. No one was as daring as Godard. You’d watch Vivre Sa Vie or Contempt or Made in USA and you had the impression that he was actually taking apart his own movie and rebuilding it before your eyes. You never knew what to expect from moment to moment, even from frame to frame – that’s how deep his engagement with cinema went.

He never made a picture that settled into any one rhythm or mood or point of view, and his films never lulled you into a dream state. They woke you up. They still do – and they always will. It’s difficult to think that he’s gone. But if any artist can be said to have left traces of his own presence in his art, it’s Godard. And I must say right now, when so many people have gotten used to seeing themselves defined as passive consumers, his movies feel more necessary and alive than ever.

I have said to friends that I couldn’t imagine a world in which I was alive but Jean-Luc was gone. His presence made me brave. His films gave a belief not in cinema – for I was already a believer – but in how I had to find my own path, even with my extremely small gifts. He quoted – stole, even – from films, paintings, music and literature from the whole world, but I believe his spirit resided in the middle of Europe: a continent heavy with history. With Le Petit Soldat, Godard revealed a side of France during the Algerian liberation war. Today there is war in Europe again, so let’s watch Je Vous Salue, Sarajevo once more.

I am sitting in a taxi cab and the radio is playing Satisfaction by the Stones and the woman announcer is saying: “Soixante-cinque, 1965.” Jean-Luc was really rolling then. I started making films in 1967 when I was 16 and soon discovered they made movies outside of Hollywood. I used to devour one great director at a time, watch everything then move on, but I never moved on from him.

Like Pasolini, the writing was as special as the films and brought us back again, to see them in a different light. I grew up thinking, after the death of the Kennedys, Martin Luther King and Malcolm X, that the next batch would come along soon but they never did. No one ever followed him. Except for Pier Paolo Pasolini, no one came close. I would sit as a baby film-maker and even the poetry of the titles would blow my mind: My Life to Live, One Plus One, A Woman Is a Woman, Alphaville, and my favourite, All the Boys Are Called Patrick. A sad day.

As Proust and Joyce are to the novel, so Godard is to cinema. They all still cast their power over new writers and directors. Godard’s influence and his fierce passion tower above us, and we who are left behind can only remember and bask in this reflected glory. It is hard to say goodbye when au revoir would be more comforting. We are now impoverished by his going. I didn’t know him personally but he gave me a compliment once which I shall always treasure. So, ladies and gentlemen, hats off and stand for the passing of a genius.

I’m 17 years old, I arrive in Paris, I discover Pierrot le fou at the Saint-André des Arts cinema. I exit drunk (or sober?): is life (a life) therefore possible? A few steps from the cinema, I find a 100-franc note on the sidewalk. I pocket it. “This will be my first movie money,” I thought to myself.

I’m 19, I spend two or three days on the set of Sauve qui peut (la vie) in Switzerland. Godard hasn’t made a “movie movie” in ten years. The only conversation between us was when he was driving me back to the hotel one night. He asked me, “Isn’t there a lot of air back there?” I replied no, there wasn’t a lot of air. (There is never a lot of air.)

Several years later. My second film has just been released. Godard finds out I’m out of shape. He calls me. See you in Paris, we’ll talk. Shortly after, he offered me a small role in his next film, King Lear. A few months later, I’m in Rolle with my love for filming. It’s nice to be here, playing around a lake. The footage is still much lighter, familiar, free, than that of SQP (LV). Who is the younger one between us?

A politicized student of Hitchcock (combining suspense, technique and poetry), Godard never failed to revisit the 20th century (and beyond it, our entire history) and warn: thought, love, sex, evil, beauty, our choices… nothing is “one of two things,” as bits would like to impose on us (a computer number that can only take on two values — 0 or 1). But yes, as he said: one, two or three things… or a million things. (Quantum physics). Therefore, it is our duty to always react and re-act, rethink everything, always reimagine everything.

Until proven otherwise, it’s not Godard who’s dead, it’s us. We, the “bit” generation. Our 21st century urgently needs to be reinvented. We will have to be reborn, open our eyes and cinemas, and learn the lessons. “Beauty is the splendor of truth.” I salute you Godard. Shit. (and thank you for not resting in peace.)