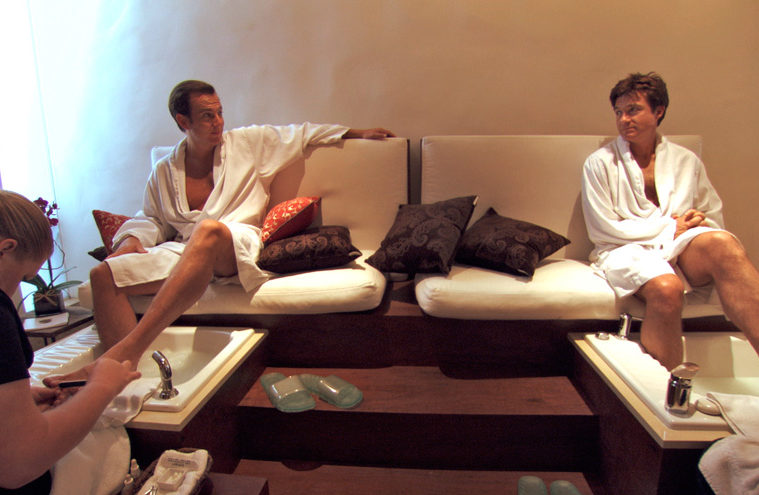 He’s tackled McDonalds, Osama Bin Laden, the entire Hollywood marketing system, and most recently Comic-Con. Now, documentary filmmaker Morgan Spurlock is taking on the vital issue of male grooming with Mansome. He explores everything from the pubic area to the top of the head with producers Will Arnett and Jason Bateman, who also appear in the film.

We recently got our first clips, but now a trailer has arrived and it looks to be an entertaining, light look at a often hushed topic. It takes me almost a month to grow anything resembling decent-looking facial hair, so while I won’t relate, the doc still looks like some fun. Also featuring Paul Rudd, Zach Galifianakis, Adam Carolla, Judd Apatow and even John Waters, check it out below via EW.

Wild chops, muttons, and handlebars are not just gamey cuts of meat or motorcycle accessories anymore. They are terms in a manscaping lexicon that celebrate hairy achievements in an age when guys seem to care more about trimming their chin curtains and waxing their backs than growing chest hair. With today’s men getting just as many spa treatments as women, and with a slew of new products aiming to freshen and sculpt all manly parts, does all this newfound grooming influence the age-old question of what it means to be a man, or have dudes just finally succumbed to human hygiene?

Oscar nominee Morgan Spurlock (Super Size Me) and executive producers Ben Silverman, Will Arnett, and Jason Bateman present a delightfully entertaining documentary exploring the current state of mandom in America and beyond. Traveling to traditional barbershops and trend-savvy salons across the country and attending an international beard contest in Austria, Spurlock shows us the art of being a man is taken to new hilarious levels. Complete with candid interviews from Arnett, Bateman, Paul Rudd, Zach Galifianakis, and lots of everyday people, Spurlock sets out to uncover the true secrets of being “mansome.”

Mansome premieres on April 21st during Tribeca and then hits theaters May 18th.