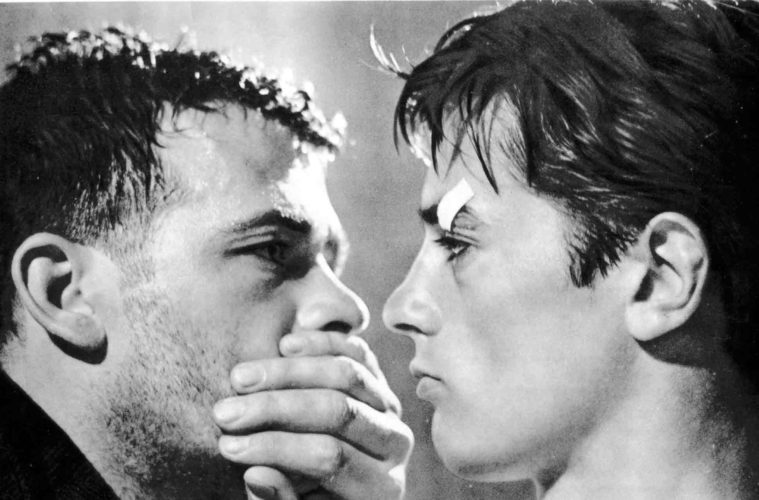 After being a major influence on his work, Martin Scorsese worked with Milestone Films to bring forth a stellar-looking restoration of Luchino Visconti’s 1960 classic drama Rocco and His Brothers. After stopping by various festivals, including TIFF and NYFF, it’ll be released in NYC and Los Angeles next month, followed by hopefully a home release.

We now have a new trailer, which is fairly brief, but gives us a glimpse at the restoration while introducing our main ensemble. Starring Alain Delon, Annie Girardot, and Claudia Cardinale, check out the trailer and gorgeous poster (designed by Lauren Caddick) below for the film which kicks off its three-week run at Film Forum on Friday, October 9.

Joining the tragic exodus of millions from Italy’s impoverished south, the formidable matriarch of the Parondi clan (Katina Paxinou, Best Supporting Oscar winner, For Whom the Bell Tolls) and her brood emerge from Milan’s looming Stazione Centrale in search of a better life in the industrial north. But, as they inch up the social ladder, family bonds are ruthlessly shredded, as the love of Delon’s saintly Rocco (“one of the most vivid and complex characters in all of Visconti’s work” – Vincent Canby) for prostitute Girardot drives brutish boxing sibling Renato Salvatori to rape and murder.

Simultaneously a documentation of a changing society; a kind of continuation of Visconti’s classic La Terra Trema; an evocation of the works of Sicilian titan Giovanni Verga, Dostoyevsky’s The Idiot, and Thomas Mann’s Joseph and His Brothers; and a visual tour de force as lensed by Giuseppe Rotunno (The Leopard, 81⁄2, Amarcord, All That Jazz, etc.), Rocco rocketed Delon and Girardot to international stardom and vaulted Visconti to his second triumvirate — here with Antonioni and Fellini — at the cutting edge of Italian filmmaking (his first, with Rossellini and De Sica, in the heyday of Neo-Realism).

The director’s personal favorite, Rocco’s mix of realism and intense, operatic emotion would profoundly influence the work of Coppola and Scorsese.

Rocco and His Brothers begins screening on October 9th at Film Forum.