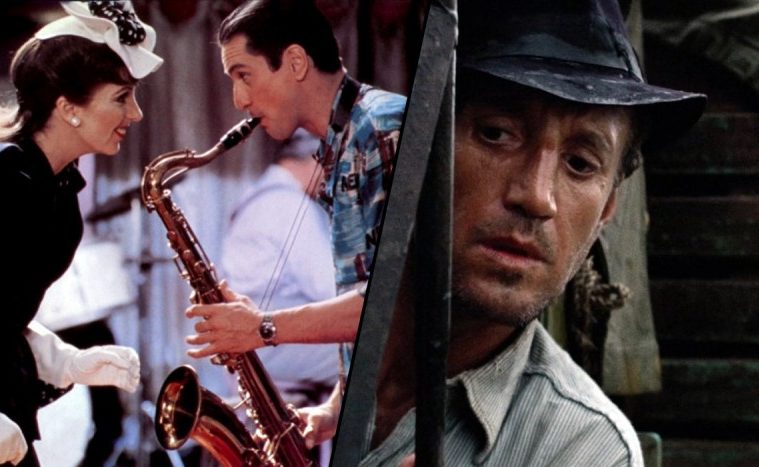 June 1977: When New Hollywood Got Weird

Last month, coverage of the 40th anniversary of Star Wars was understandably extensive, with pop-culture publications, daily newspapers, and TV media commemorating a film that by all rights changed the landscape of Hollywood, for better or worse. Conversely, there will likely be relatively little retrospective celebration for William Friedkin’s Sorcerer or Martin Scorsese’s New York, New York, two terrific films released roughly one month later in the week of June 19-25. Though they weren’t the first examples of New Hollywood directors following huge successes with more difficult works that flopped (Peter Bogdanovich’s secretly lovely At Long Last Love comes to mind), they stood in 1977 as back-to-back examples of talented filmmakers – one Oscar-winning, the other well on his way to becoming the most-acclaimed director of his generation – overreaching and failing after becoming a bit too full of themselves.

That is, of course, an oversimplification, just as the other charge popularized by the likes of Peter Biskind – i.e. George Lucas’ grand space opera and Steven Spielberg’s personal blockbusters killed Hollywood’s interest in movies for adults – is an oversimplification. In all truth, it isn’t surprising that audiences didn’t go for Sorcerer or New York, New York, two especially challenging-for-the-mainstream features that pushed their creators’ aesthetics to greater extremes than before while tracking in subject matter that was pessimistic even for the time. But while both films and their troubled productions saw directors burned by their ambition, they are also exceptional works showcasing how exhilarating it can be when all commercial sense goes out the window.

Friedkin’s Sorcerer can lay more claim to having been actively harmed by the arrival of Lucas’ megahit, arriving exactly one month later, on June 25, and competing for a thrill-seeking crowd. (One theater reportedly pulled Star Wars for Sorcerer for a week, only to replace it when Friedkin’s film failed to lure an audience.) The film, a remake of Henri-Georges Clouzot’s 1953 masterpiece The Wages of Fear, was also hurt by its confusing title — named after one of the trucks transporting dynamite through a dangerous jungle to put out an oil fire — and a budget that ballooned from an initially planned $15 million to $22 million following a difficult production.

Friedkin, hot off the Oscar-winning The French Connection and hugely successful The Exorcist, already had a reputation for his temperament and arrogance. They were in full force on Sorcerer: he clashed with cinematographer Dick Bush, who left halfway through filming, as well as producer David Salven, whom Friedkin fired after fights over the expensive location shoots. Friedkin extensively clashed with Paramount brass, sometimes reasonably (kicking executives off set after perceived interference), sometimes amusingly but questionably (the evil oil execs pictured in the film are actually Gulf & Western’s executive board, and they repaid him by not promoting the film). The jungle shoot itself was hell, with about 50 people quitting following injury or illness while Friedkin himself contracted malaria and lost 50 pounds.

But it’s only appropriate that the making of Sorcerer was so desperate, given the story it tells. Friedkin’s worldview has always been bleak and cynical, and Sorcerer may be the purest expression of that. Its heroes are a hard-bitten New Jersey hood (a spectacularly testy Roy Scheider) hiding out after shooting a mobster’s brother, a crooked French banker (Bruno Cremer) on the run following fraud accusations, a Palestinian terrorist (Amidou) behind a Jerusalem bombing, and a Mexican hitman (Francisco Rabal) who gets in on the job after murdering the fourth driver (Karl John), apparently a fugitive Nazi. The film presents their crimes as facts and without real judgment, their rottenness just another bad part of a burned-out, brutal world.

Where The French Connection and The Exorcist gave viewers visceral thrills early on and some sense of right and wrong (even if it’s fatally compromised), the early action in Sorcerer is more painful, with suicide, terrorism, and the loss of friends and partners forming the four prologues introducing the men at this film’s center. Friedkin then drops us into squalor and despair in a small South American town where the heat and rain are nearly as oppressive as the police state, the work is dangerous and pays little, and the mud seems to soak up any sense of hope. It’s little wonder that they might take up the dangerous assignment of driving through an arduous jungle landscape with unstable explosives that could set off at any moment. When you’ve been driven into no man’s land by your sins, any way out is worth it — no matter how unlikely it is that you’ll survive.

The actual drive up to the oil well doesn’t begin until about halfway through and takes on the tone of an unusually fraught funeral march for the protagonists. Friedkin’s immediate, docurealistic style helps ground the proceedings as set-pieces grow more heightened, most memorably when the drivers guide their trucks over a deteriorating bridge as the river beneath it overflows — the most expensive sequence in the film, as well as the most difficult-to-shoot of Friedkin’s career. As Popeye Doyle’s car chase in The French Connection and Regan & Chris MacNeil getting jerked around in The Exorcist evince, Friedkin always had a gift for making scenes that were already dangerous in conception even more tactile and nerve-wracking. Here, his emphasis on the mechanics of the crossing – the snapping rope and wood – as well as the fragility of the bodies attempting to cross (particularly as one rider steps outside to guide the truck and risks getting thrown off or crushed in the process) make the danger of their situation all the more palpable.

Yet there’s a more existential doom permeating the film compared with the nihilism of his earlier efforts, a more complete melding of his hard-bitten style with expressionistic touches that peppered The Exorcist. Part of that comes from Tangerine Dream’s ethereal score, which accentuates a sense that the elements are set against the drivers. But Friedkin also lends the film’s grungy look a sort of otherworldly menace, whether the camera soars through gorgeous greenery while a fire burns in the background or Scheider envisions a stream of blood soaking the dirt.  Even the small moments of beauty (e.g. a butterfly hiding from the rain or a woman briefly dancing with Scheider) seem to tease the protagonists and underline their utter hopelessness. By the time we reach a grim conclusion, Friedkin has taken us through a world without mercy or decency, in which fate mocks even the most resilient of us.

Martin Scorsese’s New York, New York, released just a few days earlier on June 21, was less plausibly affected by the release of Star Wars, and more likely the victim of critics and audiences being put off by its mix of glossy, Vincente Minnelli-esque musicality and aggressive, John Cassavetes-influenced verisimilitude. Scorsese, with the story of a creative and personal relationship collapsing under the weight of jealousy in a postwar environment, sought to bring to the forefront the unhappiness lurking under the surface of films such as Meet Me in St. Louis and My Dream is Yours.

It, like Sorcerer, had a difficult production, with the director battling a severe cocaine addiction while breaking up with then-wife Julia Cameron and carrying out an affair with lead actress Liza Minnelli. The film’s herky-jerky rhythms and circular intensity seem to take cues from that tension, the big-band musical numbers clashing with deliberately repetitive improvisations and screaming matches. Scorsese had mixed realism with melodrama (Alice Doesn’t Live Here Anymore) and grit with florid formalism (Taxi Driver) previously, and would go on to marry his classic and New Hollywood interests more palatably in Raging Bull. But New York, New York isn’t a marriage so much as it’s a push-pull war, one that’s sometimes exhausting.

Acknowledging the unattainability of Hollywood fantasies makes it no less vital a love letter. Scorsese opens with an astonishing crane shot on V-J Day as Robert De Niro’s Jimmy gets lost in the excitement of a crowd, only to appear under an arrow that both pinpoints and isolates him. De Niro’s first interactions with Minnelli’s Francine, meanwhile, are less a meet-cute, more an ongoing, insistent harassment that eventually wears down her defenses. The entire opening sequence communicates a sense of spiritual and personal emptiness amid celebration, an early warning that not all is well in the postwar era.

De Niro continues playing Jimmy as a halfway point between his insecure, jealous bruiser in Raging Bull and his relentless, obnoxious pest in The King of Comedy, but Scorsese finds some truth in his and Francine’s romance (even as it’s rotting from the inside out) in their musical performances, with the two finding a better balance and greater chemistry as they perform “You Brought a New Kind of Love to Me.” Their partnership flourishes out of a mutual recognition of talent — or, in his case, recognition of greater possible success together. Still, that balance begins to tip whenever Francine asserts herself, as in a scene where she tries to pep up the band following one of Jimmy’s criticisms, only for him to tear her down. And the film’s most gorgeous images undermine any possibility of happiness between the two, with De Niro proposing (badly: “I love you… I mean, I don’t love you. I dig you; I like you a lot”) in front of a fake forest.

Purposefully, the film’s first two hours give more emphasis to Scorsese’s more discursive side, major arguments between Jimmy and Francine getting interrupted by Jimmy’s ability to get into a minor argument with anyone he encounters. It’s in the final third that focus shifts to the director’s inner formalist and New York, New York turns into a proper musical with the remarkably bittersweet “Happy Endings” sequence. Francine’s finally given a chance to flourish as a performer, unhindered by Jimmy’s jealousy, and Scorsese jumps into an unabashedly stagey finale not unlike that of The Band Wagon or An American in Paris.

Yet the climax still reflects the inherent unhappiness in Francine’s life, telling a story of a relationship ended by success, only to double back and conclude with a wish-fulfillment coda that only makes it more painful. We’ve already seen the truth in the lives of Francine and Jimmy, and no rousing performance of “Theme from ‘New York, New York’” is going to change that. Their final encounter twists the knife further, giving one last tease of possible reconciliation before recognizing that it’s impossible, leaving Jimmy with a final, lonely shot echoing that V-J Day opening.

Audiences and critics largely rejected New York, New York and Sorcerer, with neither film making its budget back or earning the raves their makers had come to expect, but time has been kind to both. They haven’t exactly seen widespread reevaluation as their makers’ best works — Sorcerer wouldn’t be too far off for this writer, and Scorsese’s film has its passionate advocates — but they’ve developed cult followings and at least partly shaken off their previous distinctions as merely ambitious follies. Perhaps it’s appropriate that they’re not as widely cited as Taxi Driver and The Exorcist – they’re pricklier than their more popular predecessors, better suited as advanced viewing than introductory works. They may not generate thousands upon thousands of appreciations 40 years later, but they’re there, waiting for curious viewers to make a discovery.